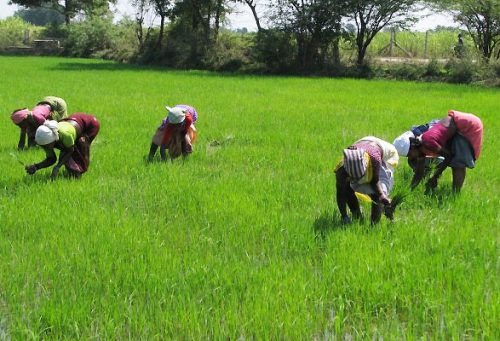 The Prime Minister has advised farmers that they need to form groups and work together. This would mean larger plots of land being cultivated, resulting in lower costs and increased yield.

He then went on to warn the farmers that they cannot keep relying on government subsidies. Whilst expressing sympathy and understanding, the PM stressed that solutions to the problems need to be found.

He went on to say that there are a great number of other groups of people who require the government’s help and the farmers have to understand that.

Another issue is that a curb in production is required to ensure a profit is made from the grain as current production costs are too high.

The Prime Minister again praised those who have aided the farmers in selling their rice direct to consumers but it only represents 5% of the sales.

Meanwhile, a number of provinces, including Buri Ram, are allowing farmers to sell their rice at provincial halls. Soldiers are also continuing to help with harvests and  they assisted in an area in Kohn Kaen where flooding was causing major problems.

The military are also committed to buying rice for their camps throughout the country direct from the farmers.

(Thanks to The Nation, Thailand)