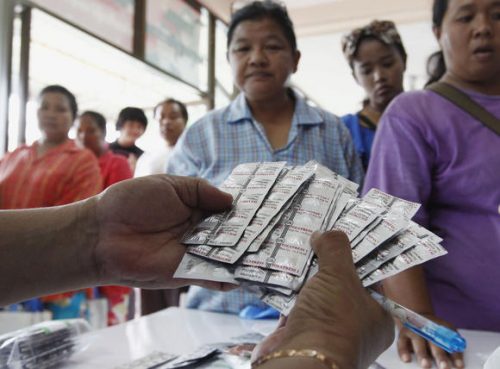 Thailand imports all its cancer drugs.

PTT,Thailand’s state-owned oil and gas giant, is entering into pharmaceuticals with plans to set up the country’s first-ever cancer drug production plant.

The company signed an agreement with the Government Pharmaceutical Organization, a state-owned drug producer and supplier under the public health ministry, on Tuesday to jointly build the plant.

Thailand is trying to reduce drug imports and nurture an industry to produce high-standard drugs, in view of the fact that its population is aging at a faster rate than other developing economies in Southeast Asia.

A feasibility study for the PTT project will be completed by March. Both parties estimate that total investment in the project will be around 1 billion baht ($32 million). Commercial production is set to start by 2025 at an industrial site owned by PTT in the coastal province of Rayong, east of Bangkok.

The province is part of the Eastern Economic Corridor, a special economic zone the government is heavily promoting to draw in high-tech investment.

PTT, which is increasingly diversifying its operations to non-oil businesses, will provide the project with its expertise in engineering, chemicals and factory construction.

Cancer is the highest cause of death in the country of 69 million. As of 2012, there were some 85,000 cancer-related deaths a year in Thailand, according to the World Health Organization.

“The health system of the country cannot accommodate this increasing number of patients because we rely 100% on imports and some type of cancer drugs could become very expensive,” said Nopporn Chuenkum, director of the Government Pharmaceutical Organization. Domestic production will reduce prices by more than 50%, he said.

The plant will produce drugs for traditional chemotherapy in the form of injections and pellets. Drugs used in targeted therapy to block the growth of cancer cells will also be made in this factory.

PTT Chief Operating Officer Auttapol Rerkpiboon said that the project will help Thailand’s pharmaceutical industry to rise to “international standards.” He added that it is also in line with the country’s long-term development policy to focus more on high-technology industries rather than labor-intensive ones now that it wants to become a high-income country.