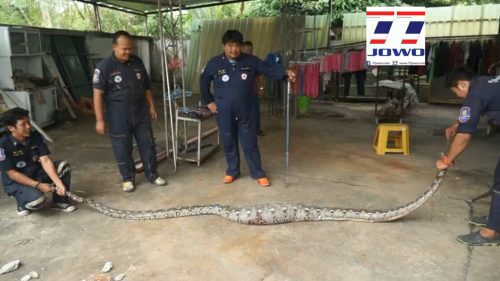 What had the python eaten?

It is often said that Thais can eat anything but even the locals were in for a shock yesterday when they found what a python had swallowed.

Following a successful snake catching at a Samut Songkram house the foundation staff of Sawang Benjatham were amazed to see the python regurgitate its meal in the back of the pick-up – a 15 kilogram water monitor.

The 4.5 metre, 20 kilogram snake had been extricated from under some broken concrete at the home of Uraiwan Khonhasuk, 44. It was angry but the snake-catchers did a good job to get it in the back of their vehicle.

It was clear from a large bulge that it had recently been feeding but no one was sure what it was.

This was later revealed as the sensational video continued rolling while the snake was taken back to nature.

Uraiwan said that she saw the snake when she was hanging out the washing. They have water monitors behind their house but she never believed a snake could eat one.