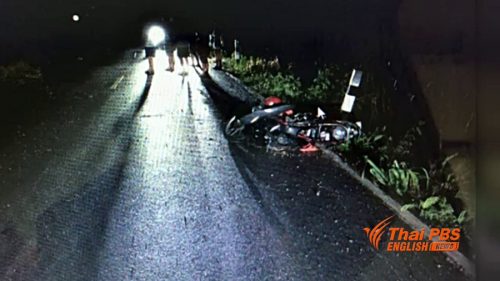 A rally driver turned himself into police in Muak Lek district of Saraburi on Thursday to confess that his car hit a motorcycle, killing the rider on August 18.

Muak Lek police superintendent, Pol Col Tatchakorn Rodjiam, said that the driver, Mr Bundit Bunditta, admitted his car hit the motorbike but the police would need to examine a list of all the drivers of the Asia Cross Country Rally 2017 and question the race supervisors to find out who actually drove the car that hit the motorbike, killing its rider, 61-year old Mrs Booonma Iamsa-ard.

He said he had asked Mr Bundit to drive his race car to the Muang Lek district police station on Friday for inspection in comparison with the car parts which were recovered at the scene of the accident.

The accident was posted in the social media and widely shared with many netizens criticizing the driver for not stopping his car after the accident.

However, it was discovered that another car participating in the race struck a motorcycle attached with side-car in Ban Tha Mafuang, Tambon Chorakhe Phuek, Dan Makhamtia district of Kanchanaburi.

The accident prompted villagers in the village to close the road in the interests of safety.

It was reported that the rally organizer agreed to move all the racing cars out of the village after the accident.

The rally organizer was asked by several supervisors to inform the company which sponsored the rally that the route used by the racers was not safe.