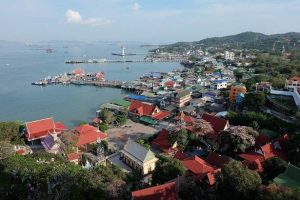 The rape/murder of a 27 year old German woman on Koh Si Chang, Chonburi has been reported by the UK tabloid press.

The Mirror repeated warnings about backpackers from the UK and Europe travelling to Thailand and quoted the foreign office.

They did not state whether these were new warnings or old ones.

“British and European backpackers have been killed or injured in a number of high-profile attacks in Thailand in recent years.

“UK tourists Hannah Witheridge, 23, and David Miller, 24, were bludgeoned to death on a beach in Koh Tao, southern Thailand, in 2014.

“The Foreign Office warns: “Violent sexual assaults and unprovoked attacks have been reported in tourist destinations across Thailand.

“These are particularly common during Full Moon parties and other similar events and late at night near bars.

“Drink spiking and date rapes have been reported in tourist destinations around Thailand, with both male and female victims

“Be careful about taking drinks from strangers or leaving your drinks unattended, particularly in Koh Tao, Koh Samui, Pattaya and at the Full Moon party on Koh Phangan.”

The latest attack occurred on Koh Si Chang on Sunday.

The victim is believed to be Miriam Beelte from Hildesheim, Germany.

A 24 year old Thai man is in custody after a manhunt on the island.