Revealed: The Special Button That Allows Bent Taxi Drivers To Rip Off Customers 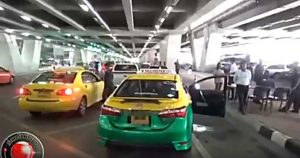 Revealed: the special button that allows bent taxi drivers to rip off customers.

An online video showed what one taxi driver was doing to rip off his customers. He had rigged up a special “red button” that he pressed while driving.

The button – hidden under duct tape and attached to an arm behind the steering wheel column – was pressed to increase the distance travelled.

A young policeman at the airport explained the modus operandi.

The driver made a poor effort at mitigation.

After being pressed by a reporter to admit the extent of his wrongdoing he said: