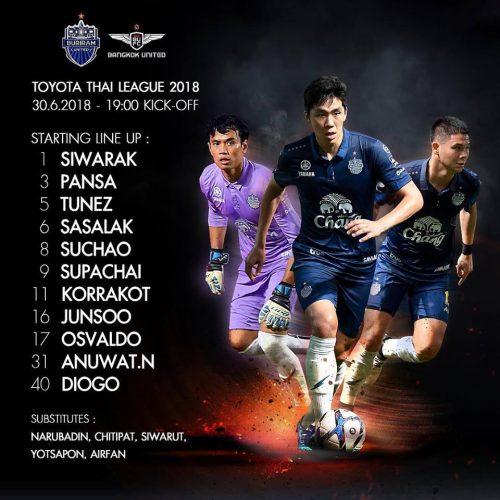 Sasalak’s 87th minute strike was enough to secure a vital and hard-earned 2-1 win over title rivals Bangkok United. It was a nervy encounter with both sides looking vulnerable at the back. The visitors probably created the better chances with Siwarak looking decidedly shaky at times. However, Tunez was outstanding and kept Buriram in the game with some timely tackles and interceptions.

Diogo was again not at his best and spent far too much time playing deep instead of being where he is most dangerous, in the opposition penalty area. Buriram are looking very lightweight up front with Osvaldo again disappointing in front of goal. Losing Edgar is proving to be a serious error of judgement.

It was a far from convincing performance with too many players guilty of giving the ball away carelessly in potentially dangerous situations. At times, Buriram moved the ball about well but too often the final ball was disappointing. United looked much more dangerous with their quick breaks and will be wondering how they contrived to lose the game.

However, they got what they deserved for their indiscipline and attitude which will be covered in a separate article.

Buriram got off to a dreadful start, falling behind in the 4th minute. They had already had a warning but they failed to heed it as United created an overlap in the right of the area. When the low shot came in, Siwarak could only parry it, leaving Robson with the simplest of chances.

By his own high standards, Siwarak will be disappointed with his performance, looking uncharacteristically uncertain throughout and he probably should have done better when dealing with the shot.

Buriram almost hit back immediately when some Diogo magic in the box gave him a shooting chance but he fired tamely into the side-netting. Another chance came in the 14th minute when Suchao fed Osvaldo down the left and the Brazilian cut into the box but went for goal from a tight angle when a cross would’ve been a better option.

Buriram were having some success down the left and in the 22nd minute Osvaldo sent over a great cross which found Sasalak unmarked but he sent a weak header wide.

The equalizer finally came in the 24th minute when Sasalak found Diogo in the right of the area and he crossed to the far post where a defender inexplicably allowed Korrakot to steal in behind him and the place the ball into the far corner of the net.

A minute later Diogo was brought down inches outside the angle of the penalty area but he sent the free-kick over the top. Back came Buriram in the 27th minute and Diogo found Osvaldo twenty yards out but his shot was way too high.

Suchao picked up a yellow card before an extraordinary incident in the 29th minute had everyone scratching their heads. Siwarak made a complete hash of a free-kick hit directly at him and the ball fell about a yard from the line leaving two United players with the simple task of putting the ball in the net. Incredibly, they left it to each other and the ball ran out of play.

In fact, an offside flag had been raised so blushes were spared. Lucky boys ! 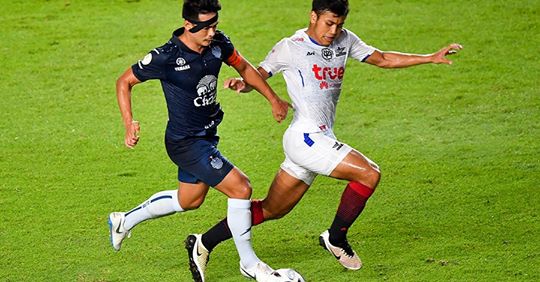 Buriram carved out a good opening five minutes from the interval when Diogo played Osvaldo in down the right but he hurried his shot and failed to hit the target. A wasted opportunity.

So everything to play for in the second-half.

Narubadin came on for the injured Osvaldo.

Buriram almost made the worst possible start when Supachai gave the ball away near his own penalty area and the resulting free-kick flew inches over the bar. The home side replied in the 48th minute when Tunez’s back-header from a left-wing free-kick was agonizingly just wide of the far-post.

Diogo tried his luck with a volley from thirty yards in the 52nd minute and was unfortunate to see it fly just wide. A minute later another horror mistake by the Buriram defence saw two players going for the same ball which left Robson free on goal. However, Siwarak was quickly out to block the low shot.

Buriram were in trouble again in the 64th minute when Anuwat was caught in possession just outside the area but fortunately the low shot was just wide. After that, the game deteriorated somewhat with both sides not wanting to concede.

United were guilty of a number of instances of indiscipline and were very fortunate not to have someone sent off. They got their just desserts in the 87 minute when Korrakot found Supachai in the box and he knocked the ball back to Sasalak ten yards out.

The midfielder chested the ball down before coolly stroking the ball past a stranded keeper to spark wild celebrations both on and off the pitch. 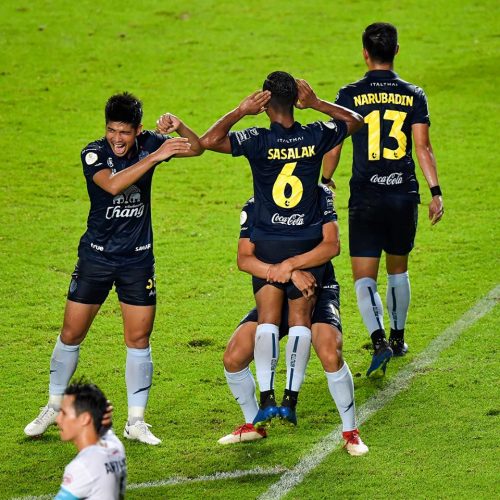 There was still time for Siwarak to be booked for time wasting and the nerves were jangling when United were awarded a free-kick just outside the box in the dying seconds. However, it was safely negotiated and the referee signaled the end of the game.

This was a great result but it shouldn’t hide the fact that Buriram are far from looking like champions. Osvaldo is not a prolific finisher and there are are a number of players who are average at best. Supachai does very little to hurt teams and Anuwat gives the ball away far too cheaply.

It is impossible for Diogo to carry the sole burden of providing the goals and it was good that two midfielders did the business in this game. There will be more twists and turns this season and it is likely that Buriram’s visit to Muang Thong could decide their destiny.

Next up is Lampang at home in the FA Cup on Wednesday July 4 , 6pm and then Buriram visit Navy on Saturday July 7, 8pm.