Schoolteacher Convicted, Then Pardoned After Hit And Run Death To Learn Supreme Court Ruling On Friday 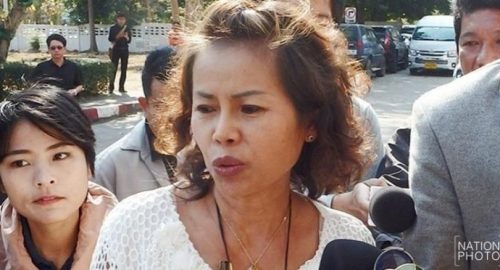 Schoolteacher Jomsap Saenmuangkhot’s long quest to prove her innocence in the hit-and-run death of a cyclist will reach its conclusion when the Nakhon Phanom Provincial Court announces the Supreme Court verdict on Friday afternoon (November 17).

The former Sakhon Nakhon teacher, 54, on Tuesday declared herself happy but overwhelmed with anticipation after learning the date of the verdict.

Jomsap was convicted in 2013 of being the driver of a pickup truck with the Sakhon Nakhon licence plate number Bor Khor 56, which eight years earlier had struck and killed cyclist Lua Phorbumrung in Nakhon Phanom’s Renu Nakhon district and then failed to stop.

She was sent to prison for three years and two months.

In June 2014, Mukdahan resident Sap Wapi confessed to police that he had been the driver of the truck involved in the accident, and its licence number was the same, though registered in his home province.

Jomsap was granted a royal pardon in April 2015 after serving 18 months and asked the Justice Ministry to reopen her case so she could try to establish her innocence and clear her record.

“No matter what it is,” she said on Tuesday of the pending court verdict, “I will accept the ruling, because I fought this battle following the proper legal procedures.”

If the court finds that she is in fact guilty, she said, she would still seek reinstatement to the civil service – despite this “stain on my life”.

If she is exonerated, she would keep a promise made in prayer and donate white clothing for female prison inmates to wear during their meditation sessions and dharma practice.

She would ask to be reinstated to her former job so she could serve society well as a demonstration of her gratitude for being given a second chance.

Either way, Jomsap said, she would live a simple life following the principles of the “sufficiency economy”.

“I love teaching and I’m proud of the profession,” she said. “I have devoted my whole life to this civil service job. I’m also worried about the children whose education might be affected.

“I have unfinished business. Before I was jailed, my school had 300-400 pupils, but there is only half that number now, and I believe that’s because the stain on me affected the school. I want to go back and clear that away and restore the school’s dignity.”

Jomsap thanked the people who have helped her in trying to prove her innocence, including Justice Ministry deputy permanent secretary Pol Col Dusadee Arayawut and Mark Pilbul, who raised money through public donations for her court battle.