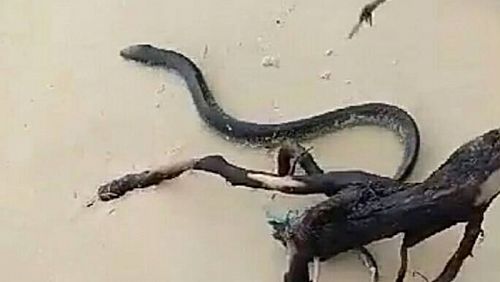 Sea snakes have this week been found on Nai Yang and Patong beaches. Photo: Screengrab from video by Khomsan Phansangiam

On Monday (Sept 3), local resident Khomsan Phansangiam took a video clip after finding a sea snake on Nai Yang Beach. He said, “I found the sea snake between 3-4pm on Nai Yang Beach in an area near the path beside Phuket International Airport. I didn’t know what to do and want tourists be warned that sea snakes are in the area.”

Meanwhile, Somprasong Saengchard, the chief lifeguard for Patong Beach, said, “We found two dead sea snakes on Patong Beach this morning. Beachgoers shouldn’t be worry as we will watch for their safety.”

Phuket Lifeguard Club President Prathaiyuth Chuayuan added, “It is normal for sea snakes to come up on the beach sometimes. Most of them are found dead (on the beach) because they are fully adapted to living in water.

“The ones found on the west coast beaches could not get back to the sea so they died. But people should be careful of them as they are venomous.

“Don’t touch them or use a stick to touch them,” he said.

“If someone gets bitten by a sea snake please inform a lifeguard immediately so they can provide first aid. They will then be taken to hospital.

If anyone sees a sea snake please inform a nearby lifeguard as quickly as possible. They will then inform the Phuket Marine Biological Centre (PMBC). However, if the sea snake is dead the lifeguards will take it away from beach and bury it.”

Times comment:- Sea snake venom is extremely toxic, so all this is sound advice. The good news is they are rarely aggressive and bites are very uncommon.