A senior education official has confessed that she embezzled Bt88 million from a state fund for underprivileged children, particularly those at risk of being lured into the sex trade.

The embezzled amount is even greater than the money that had been paid to the intended recipients, which stood at a little over Bt77 million.

“She is now a C8-level official. We suspect that she must have had accomplices,” Education Minister Teerakiat Jareonsettasin said yesterday, without revealing the woman’s name.

He has transferred five education officials involved in the fund’s reimbursements to pave the way for a full investigation. The internal-control unit of the Education Ministry uncovered irregularities in the reimbursements by the fund last week. 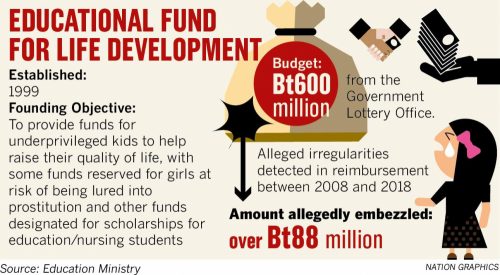 Over the past decade, the woman had been in charge of implementing an educational fund for life development, which was established in 1999 during the Chuan Leekpai government. The fund had a start-up budget of more than Bt600 million in the hope of boosting educational opportunities among underprivileged children.

The fund, at its inception, had placed an emphasis on girls in the North as many of them were considered at risk of being lured into prostitution. The start-up funds came from the Government Lottery Office.

Between 2008 and 2018, the suspect allegedly transferred Bt88 million from the fund to 19 bank accounts of people not qualified as fund recipients. The account owners were a combination of her relatives and people she knew.

This year, she allegedly transferred more than Bt3 million to their bank accounts without transferring any money to deserving recipients. Karun said that last year, just Bt825,000 went to the fund’s intended recipients and up to Bt12.8 million to those who had no right to the money.