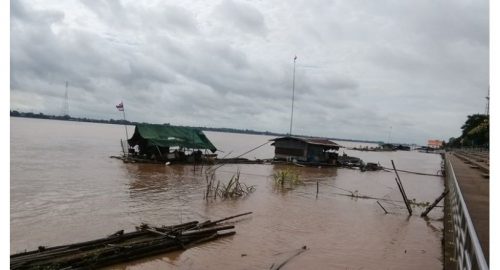 People living on the banks of major rivers in Thailand have been warned they face a serious risk of flooding.

“Recent heavy downpours look set to increase water levels in these rivers,” he said, adding that Nan province had been hit by 155.5 millimetres of rain in the 24-hour period ending yesterday morning. This rainwater will eventually flow into Nan River.

Somroeng said the Mekong had already overflowed in many provinces, including Nong Khai, Nakhon Phanom and Mukdahan.

“It may also overflow in Bueng Kan and Ubon Ratchathani soon,” he said.

The authorities are also monitoring five major dams, Nam Oun in Sakon Nakhon, Kaeng Krachan in Phetchaburi, Vajiralongkorn and Srinakharin in Kanchanaburi and Khun Dan Prakan Chon in Nakhon Nayok. These dams are 108 per cent, 106 per cent, 94 per cent, 91 per cent and 87 per cent full respectively.

Although floods have already hit many provinces, Deputy Prime Minister General Chatchai Sarikulya said the Meteorological Department had found the country’s overall rainfall to date was below normal levels.

“There are heavy rains only in some areas,” he said.

Chatchai said some provinces have not seen rain for a long period of time and he believed it would be necessary to stage rainmaking operations for some dry zones to prevent drought.

“The prime minister has already been informed of the situation. We will get a clear plan around the middle of this month,” Chatchai said.