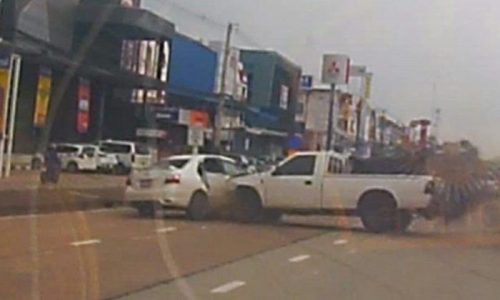 A high speed chase ensued in Khon Kaen after a white Isuzu pick-up truck failed to stop at a checkpoint near the Weluwan police station.

The police noticed that the pick-up was the same plate number as one noted in suspicious activity a week before.

The chase continued through Samran sub-district where the front driver side tire was shot out. But still the 16 year old occupant continued sometimes against traffic.

He drove onto Mitraphap (Friendship) Highway and got to Ban Non Muang where he collided with a Vios. He managed to drive a further 500 meters before bailing and continuing on foot in some woods where he was soon arrested by the chasing officers.

As a juvenile he was given the assumed name of “Nott”. Nineteen Ya Ba tablets were found in his vehicle.

Weluwan police chief Pol Col Watcharapong Chuichai said that the suspect had been spotted a week prior but had sped off before police could catch him.

Some 4,000 Ya Ba pills and a quantity of ice methamphetamine were found dumped nearby.

When police saw the same Saraburi license plate on Tuesday near a regular checkpoint they moved in and the chase began.

Pol Col Watcharapong said that though only 16 the suspect already had a long history of drug dealing.

As a juvenile he was given the assumed name of “Nott”. Nineteen Ya Ba tablets were found in his vehicle.