“Sideline Girl” Repents And Warns Others Against Selling Themselves Online 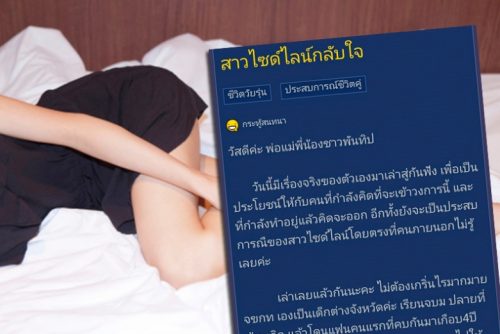 Sideline Girl warns of dangers of selling yourself online.

A “Sideline Girl” has said that she has given up the life of selling herself online. And she advises other young women not to enter the world of offering sex for money online.

“Sideline” is a Thai euphemism for young women who often have jobs or are at university who offer themselves to men online for money to make ends meet.

An organization that monitors such behaviour has said that girls doing this have increased by 30 – 40% as poor economic conditions make it harder for women to earn enough for themselves and their families to live on.

The girl who revealed her background as a “Sideline Girl” posted her experiences on “pantip.com” under the heading “Sideline Girl Repents”.

She said that she was introduced to this world by a friend after she needed money to pay back a debt. But she got hooked on the business after repaying the debt and did it throughout the time she was at university. It was easy work with lots of money, she said.

“Money was God!” she said and she worked selling herself for six years. But her life changed when one of her customers became her boyfriend and now she has a regular office job and feels better about herself.

“Sideline work will lead to your ruin”, she added.

Many online posters thought it was brave of the girl to come out and good that she was warning others.

Nathee Sorawaree the secretary of an organization that monitors such behaviour in Thai society said that there has been an increase of 30-40% of girls in the last few years in higher education and low to mid range paying jobs who are offering extras online.

And they are getting younger as Thai society becomes more open. He said that girls fall into two main groups – those looking to support families with extra income and those wanting extra money to pay for technology items that they could not afford with their regular salaries.

Times comment:- Whilst the young lady makes some valid points, any good her comments may have made has been negated by her saying she has found love with a “customer”.