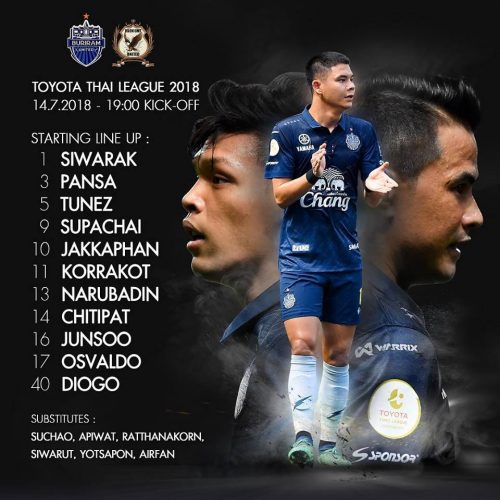 Buriram were fortunate to collect three points against relegation certainties Ubon. The visitors took an early lead but Buriram hit back to go in at half-time with a deserved 2-1 lead. However, the second-half was a different story wth Ubon’s neat interpassing causing Butiram’s defence no end of problems.

They had Siwarak to thank as he made three outstanding saves as Buriram were left clinging on at the end. It is hard to fathom how Ubon are down at the bottom of the table. They are the best footballing side to come to the Chang Arena this season and they were holding their heads in disbelief at the final whistle.

Their swift counter-attacks were in complete contrast to Buriram in the second-half as the home side were too slow in their build-ups which invariably led to the ball being played backwards far too often.

Buriram fell behind in the 5th minute when a hopeful ball out of defence saw Tunez bring it down but then dwelled on it facing his own goal. Apiwat out-muscled the big defender before coolly curling a shot round Siwarak.

This was not in the script and Buriram responded swiftly. A right-wing corner was half-cleared to the left and when the ball came back in,Tunez’s low measured shot was cleared off the line. However, the equalizer duly arrived in the 10th minute.

Oswaldo did well out on the left before finding Junsoo in the area with a delightful pass . The Korean took a touch to give himself space before sending in a low shot which was probably going in but Narubadin made sure from almost on the line.

Buriram pressed forward but only had a few fruitless corners to show for their efforts. In fact it was not until the 37th minute that Buriram managed their second attempt on goal, Jakkaphan firing high over the bar.

However, Buriram did find a way through in the 40th minute when quick thinking by Narubadin saw him send Osvaldo away with a throw-in down the right. The Brazilian got to the byline before sending over a perfect low cross which the inrushing Diogo turned into the net. A well-executed goal. 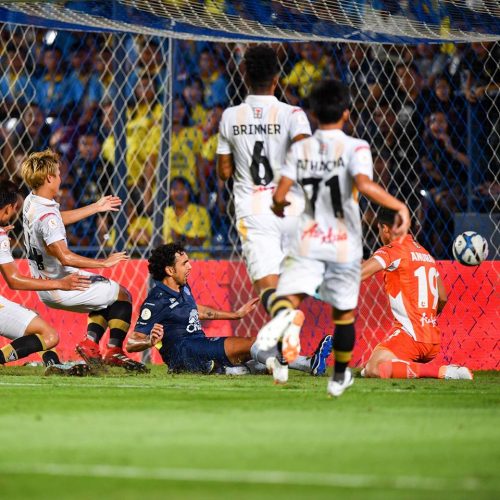 Diogo slides in the second.

Buriram just about deserved their lead but the lack of attempts on goal is worrying.

The second-half started brightly and a swift break down the right by Oswaldo saw him send over an exquisite cross-field pass for the unmarked Jakkaphan but his attempt to control the ball was woeful and the chance was gone.

Buriram then produced their best move of the match in the 51st minute when one-touch football sent Narabudin racing clear down the right. He cut inside but with both Diogo and Oswaldo screaming for a cross, he went for glory and the keeper was able to turn the shot away. Wrong choice !!

From the resulting corner, Supachai found himself free at the far-post but he sent a feeble header wide. Ten minutes later Supachai was replaced by Ratthanakorn after suffering a knock.

Buriram made another substitution in the 71st minute bringing on 17 year-old midfielder Airfan for Oswaldo. The youngster looked calm and composed on his league debut, something Buriram lack in midfield at times. 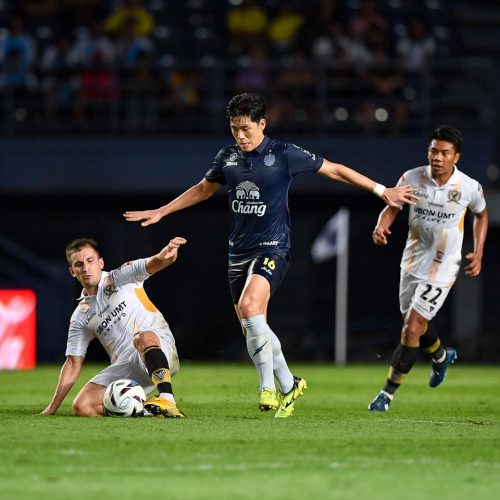 Ubon were beginning to believe they could get something out of this game and Siwarak did well to keep out a powerful shot in the 74th minute. Buriram then had a chance to wrap the game up a minute later when Junsoo played Korrawit in down the left but he shot straight at the keeper.

Back came the visitors and a quick break down the right saw the ball crossed in and Siwarak did superbly to block a shot with his legs when a goal looked certain. Diogo then took a yellow card for the team when he brought down an attacker who was racing clear with Tunez caught out of position. The free-kick was quickly taken and Siwarak produced another great save, blocking a powerful shot with his body.

Ubon created another great chance in the 89th minute when the Buriram defence was split wide open down the right but the resulting cross was headed over from close range. A big let-off.

Buriram then brought on Apiwat for Chitipat and managed to see-out the remaining minutes without anymore real alarms.

If Buriram do go on to win the title, they will look back on this game as a huge bonus because at times they were outplayed. Personally, I feel sorry for Ubon and their fans as they really don’t belong at the bottom of the league.

As for Buriram, Diogo looked dead on his feet at times and when he is not firing on all cylinders Buriram look toothless . Midfield players really have to get themselves in goal-scoring positions more often and when chances do come they have to be more clinical.

Next league game is at Chonburi on Sunday July 22, 7pm.