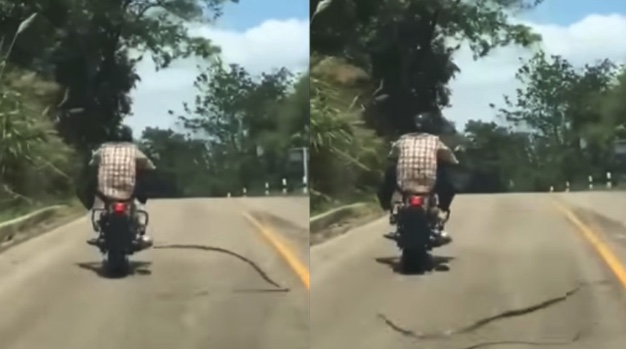 In a short but popular video clip, a very determined snake attempted to pull off an epic attack by darting at a speeding motorcyclist on the road.

Luckily, the man dodged the bite as the serpent fell flat on the ground and was probably run over by an oncoming car.

The man on the motorbike, only identified as “Worachat,” explained that he asked his brother, who was driving in the car, to film him driving down the road near Jae Sorn waterfall in Lampang province.

Unexpectedly, they captured an epic attack.

Looking at the length of a snake it is highly likely that it is a king cobra. Although highly venomous, they are not usually aggressive but this one was obviously having a bad day which got a lot worse.