Snakes Alive! Husband And Wife Arrested Taking More Than A Ton Of Serpents To Laos 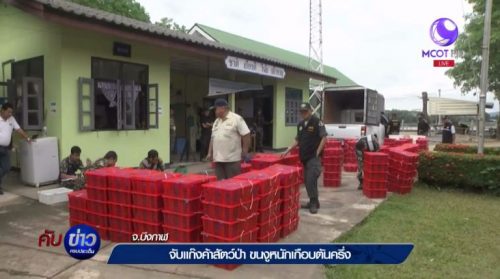 Police in Bung Karn province on the Laotian border said they had arrested a husband and wife who were transporting snakes to Laos. Officers’ suspicions were aroused by a van parked with its engine on for a long time. Inside they found 1,362 kilograms worth of protected snake species. There were 209 cobras and 162 baskets of “long tail” rat snakes. There were a total of 1,684 snakes.

The suspects told the cops they had been paid 10,000 baht by a woman called “Aew” in Chainat to drive the cargo north. Police said the snakes were worth 500,000 baht. The couple who appeared in crash helmets at the police station in Pakkat district to protect their identity were charged with the illegal possession and transportation of protected animal species.
(Source: – TNA)