South Korean Fleeced By Chiang Mai Bar Gets A Refund 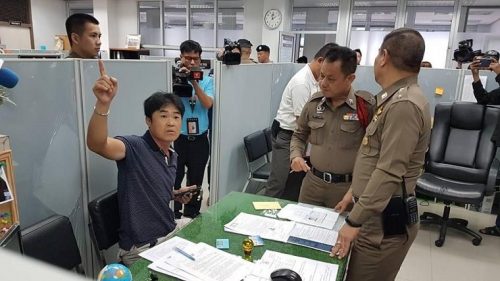 A karaoke bar in Chiang Mai province on Friday refunded a South Korean customer Bt120,000 after having billed him Bt160,000 for a few hours of service on Tuesday.

Jeong Geunbok, 46, agreed to withdraw his police complaint against the Forever karaoke bar after its manager Chaiwat Songchaiwan, 35, showed up at police station and returned the money.

Friday’s negotiations at the police station were the second after Jeong filed the complaint on Thursday, accusing the bar of overcharging him.

The first negotiation resulted in the bar operator refunding the Korean Bt60,000. However the Korean was not happy with the refund so he sought police help to set up a second meeting.

Chaiwat then returned another Bt60,000.

Pol Lt-Colonel Pornpichit Rungrueng, the deputy Chiang Mai police chief, said although the case between Jeong and Chaiwat had been settled police would fine Chaiwat for operating an entertainment venue without a permit.

The Korean told police that a tuk-tuk took him to the bar on Charoenprathet Road on Tuesday night. He was greeted by many girls who ordered several rounds of drinks.

He drank heavily and continued to drink until the bar closed. He said he was shocked when he was billed a total of Bt160,000.

He did not have enough money so a waiter forced him to pay with his credit card.

On learning about the incident, his Thai friends suggested he contact the South Korean Embassy in Bangkok and alert police.

It has been reported that some karaoke bars in Chiang Mai have hired tuk-tuk drivers to deliver foreigners to the venues, with the bars then overcharging them. When customers complain to police about being cheated, the bars reportedly return the money.

Jeoung’s complaint resulted in police raiding the Valentine karaoke bar on the same road. When police arrived, the venue appeared to be closed but police found operations continuing from the back.

Police took Thanaporn Thaweelarp, 43, the manager and some waiters working at the time of the raid for further questioning to the police station.

On checking the documents, police found that though the bar had a licence to sell alcohol, it did not have a permit to operate an entertainment venue.