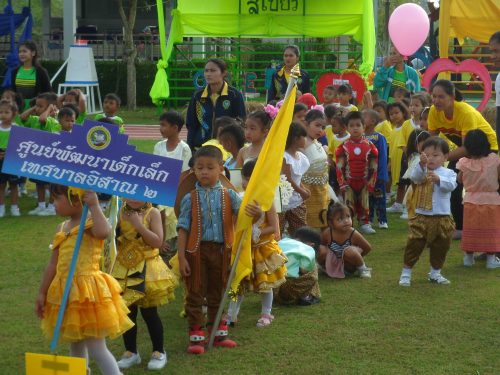 Friday December 15 saw Tessaban Isan Kindergarten hold their annual sports day. Over a hundred two and a half to five year-olds assembled with their teachers and parents around 8.30am to await the arrival of guest of honour, school owner Khun Supod.

As is his custom he was running late but he eventually arrived to get proceedings under way. Khun Supod gave an opening address before the “stars of the show” were called into action. 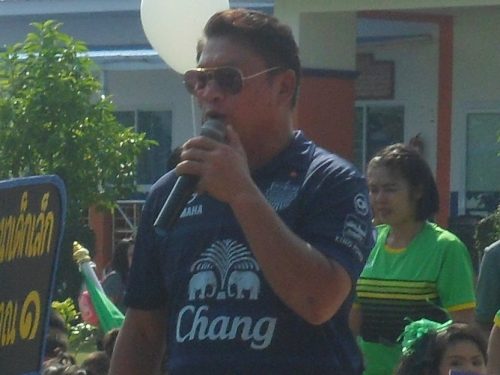 All wore the appropriate coloured shirts, apart from the dancers who were in costumes. (so cute !) The opening activity was a demonstration of modern dance which was performed by boys and girls . Enthusiastic would not do them justice. They were great.

This was followed by a traditional dance, again boys and girls who wore beautiful costumes and again performed admirably . Credit to the teachers who had obviously put in a lot of time and hard work. 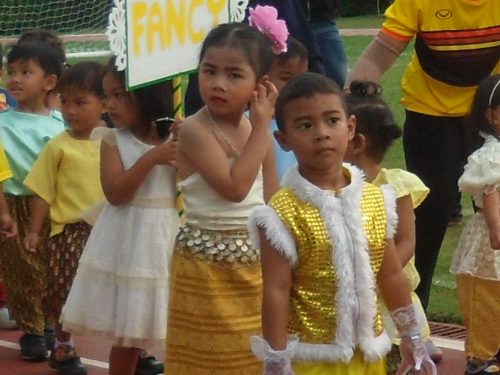 Next up was an eagerly anticipated football match between the Blues and the Greens who took a very early lead following a goalkeeping error. (He was stood behind the goal line. Bit harsh by the referee !) Despite intense pressure by the Blues, the Greens almost increased their lead in a swift breakaway but the finish was just a LITTLE off target. So 1-0 it remained. 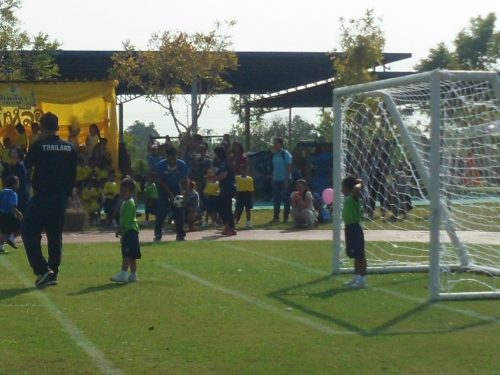 Disciplined defending by the Greens !

Now it was the turn of the Reds and the Oranges who were to fight it out in a tug-of-war. In the first pull, the rope snapped and a replacement had to be brought out. When the action resumed, the Oranges had the Yellows rocking but just as it looked like they were in control, some of the team fell over and the Yellows took full advantage.

The second pull followed a similar pattern to leave the Yellows 2-0 victors. 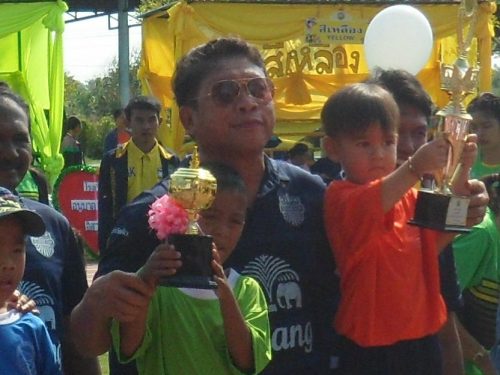 Khun Supod with the victorious Green and Orange “captains”.

Then it was the turn of the athletes in two relay races. The Orange team dominated the events winning both races to bring the morning to a close.

All the children received well-deserved medals and more importantly a twenty baht note. Does that make them EXTREMELY young professionals ? 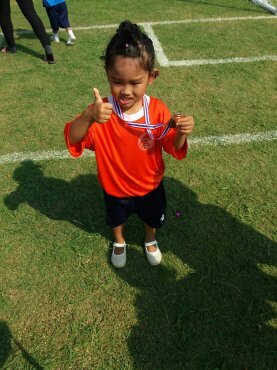 It was a thoroughly entertaining morning and the conduct of the children was remarkable , given their tender age. Their teachers deserve great credit and having been in the profession myself, I can say only very happy children could have been able to put on a show like this.

In a time when there have been a number of unsavoury incidents nationally in some Kindergartens, it’s wonderful to see that there is no chance of anything like that happening in Khun Supod’s schools.

Indeed, his interaction with teachers and more importantly the children, shows that he is a man who cares deeply about his Tessaban Isan Kindergartens. (There are two, 1&2)

A big thank to to children and teachers on behalf of all the spectators.