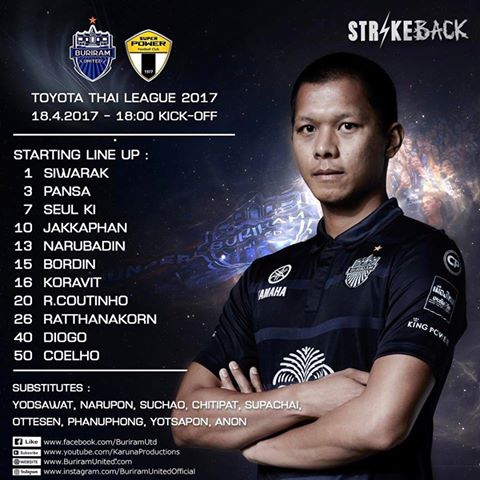 Buriram were far from their best but they didn’t need to be to see off their rock-bottom opponents. Three quality goals from Coelho(2) and Diogo lit up a rather one-sided contest , though the visitors did keep going right to the end as Buriram took their foot off the gas.

There were a number of changes with Ottesen, Suchao and Anon dropping to the bench with Ratthanakorn coming in at right-back and Pansa moving to centre-back. Korrakot was absent and Bordin, Narubadin and Coutinho came into the midfield.

In truth Buriram should have had a bagful of goals with Diogo having one of his less than impressive nights, displaying uncharacteristic wastefulness in front of goal. More of a concern was that the defence looked shaky at times with Pansa looking particularly vulnerable.

There was almost a nightmare start for Buriram when the visitors had the ball in the net following sloppy play by Pansa but an assistant’s offside flag came to his rescue.

Buriram then got into their stride and the keeper made two smart saves in quick uccession to deny Bordin and Coelho.

The first clear chance came in the 16th minute when a neat ball from Seul-Ki found Coelho who in turn set up Diogo but the finish was wide of the near post. Buriram came close in the 27th minute when the ball was laid back to Koravit some 35 yards out and his well-struck shot took a deflection before crashing against the under-side of the bar.

Buriram finally made the breakthrough three minutes later when Narubadin crossed from the right and Diogo headed the back across goal for Coelho to allow it to drop before thundering an acrobatic volley into the net. A superb finish.

It should have been two in the 33rd minute when Bordin made an excellent run down the left before pulling the back for the unmarked Diogo to fire over the bar from ten yards.

However, Buriram did get their second three minutes before the interval with a superbly executed goal. Seul-Ki played Coelho through with a perfectly weighted pass which the Brazilian latched onto to beat the keeper with a cool left-foot finish.

There was a suspicion of offside but replays showed Coelho timed his run to perfection, an excellent decision by the referee’s assistant.

So 2-0 at half-time, it could and should have been more. 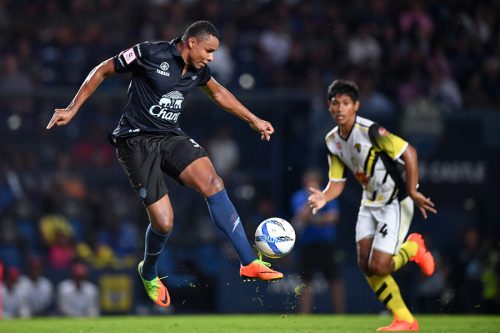 Super Power had no answer to Coelho’s clinical finishing.

Buriram made a bright start to the second period and a bout of beautiful passing gave Bordin a clear shooting chance but he side-footed high over the bar. Buriram continued to push their beleagured opponents back and the third goal duly arrived in the 62nd minute.

And it was a beauty !

Diogo played a left-wing corner towards the near-post and Coelho lost his marker before cleverly backheeling the ball for Diogo to drill a low shot which the keeper could only help into the net at his near-post.

Almost immediately Diogo was replaced by Anon and the striker didn’t appear too impressed with the decision as he obviously felt his fortune had turned and there were more goals in the offing.

Shortly after skipper Jakkaphan was substituted for Supachai and it hadn’t been one of Jakkaphan’s better displays as too often his distribution had been disappointing.

Siwarak was finally called into making a serious save in the 67th minute when he just got a fingertip to a wellstruck long range shot. Back came Buriram and Anon fed Coutinho who hammered a great shot towards the far-corner which the keeper acrobatically turned round the post.

Coutinho was then taken off to be replaced by Chitipat as Buriram settled for what they had achieved. However, in stoppage time Coelho set up Anon with a great chance in the right-hand side of the area but the shot flashed just wide.

So it was job done but is a pity that Buriram failed to put Super Power to the sword. Goals breed confidence and send out a message to rivals. That being said, the three Buriram did score were of the highest quality with Diogo and Coelho showing they are developing an excellent understanding and there’s still the return of Supachok to look forward to.

Just a quick comment regarding the referee. Early in the game, Super Power were adopting a stop the opposition by any means possible policy but the referee was quick to take action, issuing two yellow cards regardless of whether it was their first offence or not.

This is exactly how to deal with this situation, referee from Thai Port game please note !

Next game is a long trip to Chiang Rai to lock horns with our old friend Alexandre Gama on Sunday April 23, 6pm. Tough match.