Student,17, Throws Himself Off School Balcony Because Mum Didn’t Show Up For Mother’s Day Ceremony 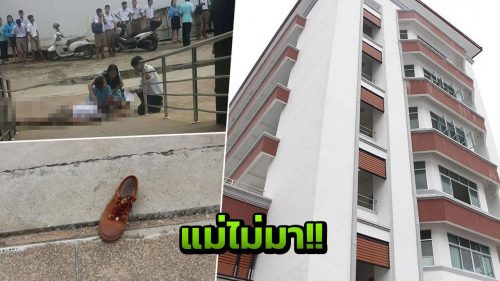 Thai media reported that a 17 year old boy at a Sisaket school jumped five floors to his death on Friday.
Jaruwit Janthet or “Ome” survived the fall but died later in hospital from his severe injuries.
Muang Sisaket police led by Pol Capt Jemrak Sosorn found a large crowd of teachers and students milling about.
The boy had already been taken to hospital. A teacher called Apiwut Thongthai, 51, said that from a distance of 100 meters he had seen the boy go up in the new building to the fifth floor. He yelled for him to stop but couldn’t prevent him jumping.
A fellow student in M5 called Wiphawinee Bunma, 16, said she also saw him going up into the building that had just been constructed but was powerless to stop him.
Apiwut said that Ome was a quiet boy with an illness who did not speak to people or get involved in the society of the school.

Police said that his parents had split up. They surmised that he was upset after his mother failed to show up for a Mother’s Day ceremony at the school on Friday.

She was apparently busy.

Despite the efforts of doctors Ome was pronounced dead later in hospital.

Thailand celebrates Mother’s Day on Sunday, the birthday of Her Majesty Queen Sirikit.