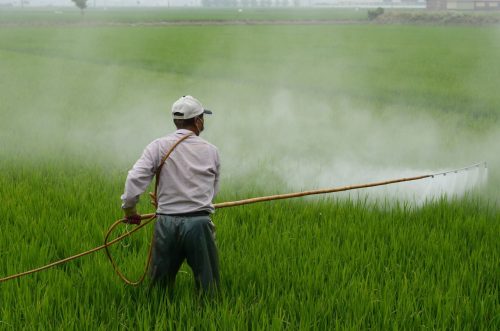 Following a recent article regarding pesticides in some supermarket produce, a more damning report has emerged.

Recent research has disclosed that serious contamination from persistent organic pollutants (POPs) and herbicides in food and the environment poses health threats to the Thai public.

The research, from Ecological Alert and Recovery – Thailand (EARTH) and Thailand Pesticide Alert Network (Thai-PAN), found that Samut Sakhon had the highest levels of dioxin contamination.

The level of contaminants known as polybrominated dibenzo-p-dioxins and furans (PBDD/Fs) was 33 times higher than European Union standards, Meanwhile, 46 per cent and 55 per cent respectively of fruit and vegetables were found to contain pesticides and herbicides.

The organisations said that toxic substances posed serious health threats and the authorities had not put enough measures and regulations in place to protect the public.

Jindrich Petrlik , the executive director of the NGO, Arnika – Toxics and Waste Programme, said studies on POPs contamination in Thailand’s major industrial heartlands included an analysis by EARTH of 11 free-range eggs samples from six areas across the country in 2015 and 2016. 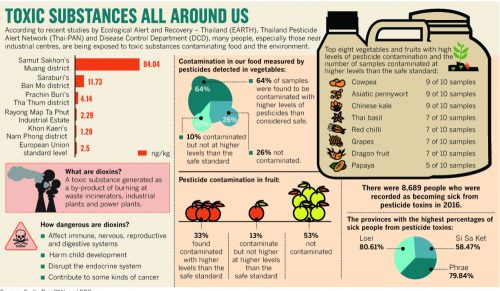 Petrlik said the researchers were shocked to find that the industrial area in Samut Sakhon’s Muang District had the second highest contamination of PBDD/Fs in the world.

He explained that the team collected eggs from chickens that foraged freely in the study areas. The eggs were used as indicators of POPs contamination in the food cycle and environment of that area, and the analysis of one of two egg samples from Samut Sakhon found the dangerously high level of PBDD/Fs of up to 84.04 nanograms per kilogram.

According to EARTH, PBDD/Fs are among the most dangerous POPs and contribute to many negative impacts on human health. All areas that registered high levels of this toxic substance were in major industrial zones.

EARTH director Penchom Saetang cautioned that the major issue that contributed to this problem was that Thailand still does not have a Pollutant Release and Transfer Register (PRTR) law and there were no reports on toxic substances discharged from individual factories.

Penchom said that even though there is a pioneer project of voluntary pollutant-release reporting in Rayong’s Map Ta Phut Industrial Estate, only 22 per cent of participating factories actually reported their discharges.

“Therefore, the authorities have to develop and enforce a PRTR law in order to pursue the goal of reducing POPs discharged to the environment,” she stressed.

Meanwhile, Thai-PAN coordinator Prokechon U-sap said that separate research on pesticides and herbicides in fruit and vegetables found that all samples from nine markets, three department stores and four supermarkets in Chiang Mai, Pathum Thani, Ratchaburi and Songkhla had higher than average contamination from toxic substances.

Despite the fact that the overall level of contamination in fruit and vegetables was slightly better than last year, Prokechon stressed that most popular vegetables – such as cowpea, asiatic pennywort, Chinese kale, Thai basil leaves and red chilli – had high levels of pesticides.

“The most concerning finding is that 55 per cent of 76 samples are contaminated with herbicides – especially Paraquat and currently illegal substances such as Carbofuran. These substances had not shown up in testing on these fruits and vegetables before,” she said.

Kingkorn Narintarakul Na Ayuthaya, BioThai Foundation coordinator, said that the relevant state agencies and food distributors needed to disclose the sources of the contaminated food so the problem could be solved at its root. Kingkorn noted that even some certified fruit and vegetables had high levels of pesticide contamination.

Kingkorn also disclosed that the alliance of environmental organisations was considering suing the Agriculture Department for allowing the renewal of licences for Paraquat against the recommendations of the Public Health Ministry.

According to DCD, 8,689 people became sick from pesticide toxins last year. Many of them were farmers, who constantly use pesticides in their fields.

“It is quite hard to detect diseases from exposure of toxic substances, as these sicknesses are often not acute. It takes time for people who are exposed to toxic substances to show symptoms, because the toxin will have to accumulate in their body,” Chantana said.

“Therefore, we have an at-risk population group for this kind of sickness – those who work or live close to these toxic substances, such as farmers and industrial workers – and we are working closely with this group to protect them from toxin-related diseases.”