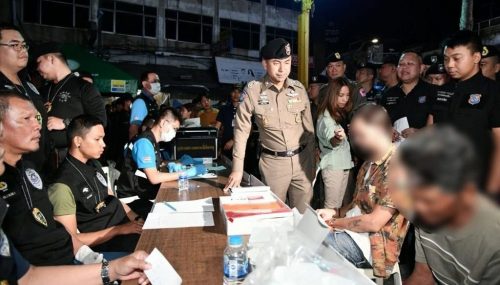 ” I want to keep the numbers at zero”

But he says the Bureau’s success in the X-Ray Foreigner campaigns outweighs the concerns of expats.

He has once again claimed that the number of foreigners overstaying their visa is “zero”, in an interview with the Bangkok Post.

Despite his claim, 506 more foreigners were rounded up just last week with a report of the latest crackdown made at one of the department’s early morning press conferences at the Grace Hotel, Bangkok. The assistant Immigration Chief proclaimed at this week’s press conference that another 52 overstayers were among the latest group.

Surachate admits that attempting to separate the good and bad foreigners “may have some unpleasant impacts” especially those who live and work in the Kingdom legally.

But he once again uttered his clarion call “bad guys out, good guys in”.

The X-Ray Foreigner campaign has been in operation for the past 18 months with the bi-weekly media gatherings where Immigration police parade a few of the overstayers or illegal workers, often from African nations.

Since the campaign started in July 2017, officers have conducted 39 co-ordinated stings in 3,755 target locations across the country.

In the crackdown police inspect a wide range of venues including rented houses, factories, international schools and luxury hotels, seeking out errant foreigners.

The Immigration Chief denies that the crackdowns have been motivated by ‘racism’. Surachete says that it just happens that many of the visitors from certain African countries have been overstaying their visas and being involved in committing crimes whilst in Thailand.

The Bangkok Post reports that in October this year, police arrested more than 40,000 suspects. Many of them were blacklisted and prohibited from re-entering Thailand.