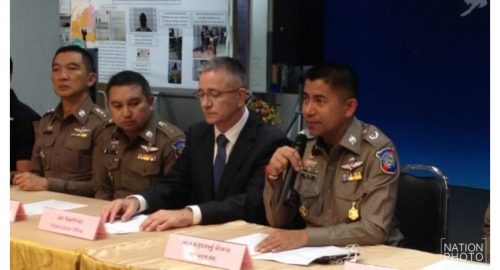 Swiss man to be deported after intentionally spreading disease.

A 42-year-old Swiss man, who was wanted in his home country for intentionally spreading a communicable disease and was captured in Surat Thani’s Koh Samui on March 14, will soon be deported to face prosecution in Switzerland, Tourist Police Bureau deputy head Maj-General Surachet Hakpan told the press on Friday.

The arrest of Swiss national Gerber Enzo stemmed from a previous attempt by the Swiss police request to have him arrested in Thailand over a 2013 bank robbery worth 645,000 Swiss francs (about Bt22 million).

After Thai police had caught him and sent him back to face prosecution in Switzerland, he was jailed for two years and six months over the robbery.

Released from prison, he is alleged to have intentionally spread a communicable disease, resulting in a second arrest warrant, and he again fled to Thailand, Surachet said.

As his passport was revoked, Enzo was denied entry at the Satun immigration checkpoint and resorted to illegally entering the country via a natural channel in 2016. Enzo was finally re-captured on March 14 in Koh Samui.

No details have emerged as to what disease he is accused of spreading , hopefully it wasn’t HIV, though that must be a possibility.