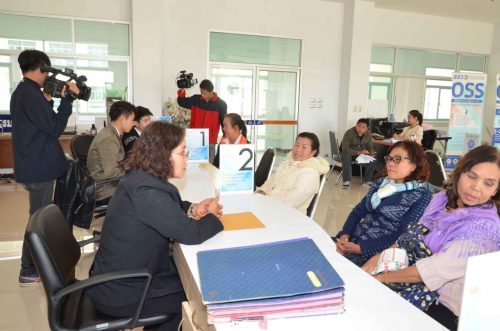 Six Kalasin teachers, who recently exposed a school director for allegedly demanding and accepting bribes, have filed a police complaint claiming that they had received death threats and were now in fear for their own safety.

The unnamed school director was accused of taking a Bt30,000 bribe from each teacher in exchange for approving special promotions.

He has been transferred from the school in Kuchi Narai district to an inactive post at the Primary Educational Service Area Office 3 indefinitely pending the results of a fact-finding investigation, which is expected within 15 days.

The six teachers, led by Wassana Pongratchata, had filed a complaint with the Kalasin Dhamrongtham Center and the provincial education office chief and submitted evidence that included documents and video clips last month. They called for the school director to be punished for such a serious ethical breach.

Wassana said her group wanted Prime Minister General Prayut Chan-o-cha to have related agencies investigate the director’s alleged bribe-taking. The teachers also want officials to provide them security as they claimed to have received death threats after their accusations.