Teen Thai Boy Runs Into His Father In Prison 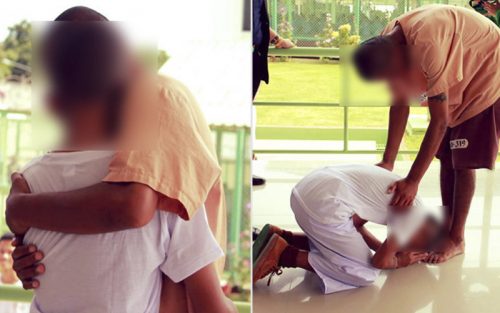 Boy meets his father on school trip to prison

A heartbreaking Facebook post published yesterday — one that shows an impromptu reunion between an incarcerated Thai man and his teenage son whilst on a field trip at a prison in Rayong province — has netizens all over Thailand  weeping.

The post by Arom Khunmoung, team leader of Jam Banjeud Rayong, an organization that plans educational and recreation excursions for companies and schools, involved a visit by a group of students to an unidentified prison dormitory.

During the tour, what the company terms a “morality camp,” he happened to notice one of the young boys “sadly standing and staring at a prisoner” with tears running down his face.

“What was strange to me is that the prisoner was staring and crying, too,” Arom wrote. “So I went to ask the boy what has happened.”

After realizing that the boy wanted to speak to his father, Arom asked if the warden would allow the pair to be briefly reunited, which he permitted.

“They tearfully ran into each other’s arms” Arom describes, adding that witnesses also started to cry as they watched the scene unfold. “The father kept on kissing the boy while murmuring ‘I’m so sorry, I miss you, when I leave this place I’m going to be a good person. Please be a good boy, son.”

Then the father, reportedly, asked the boy “Are you ashamed of me? Are you embarrassed for your friends to see that I’m in prison?”

The boy replied “No, I’m not ashamed at all,” before getting down on his knees to kowtow at his father’s feet — a traditional Thai gesture of respect.

The story reminds us of a similar story in July last year, where two boys in rural Si Saket province cycled for five hours to visit their dad in prison — only to find out it wasn’t a visiting day.

The post shared by the prison’s guard detailed that the boys didn’t have anyone to take them since they only lived their grandmother and their mom worked in Bangkok.