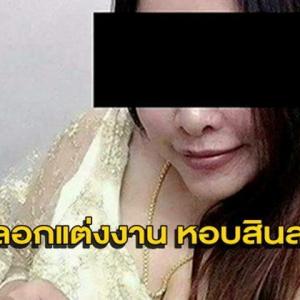 A Thai woman has left a string of angry grooms in her wake after making off with four separate dowries in the past month.

The serial bigamist came to light after the men compared notes on Facebook and realized they had all been ripped off by the same “sweet talking” Thai woman.

One of the grooms who was conned said that he had met the woman on Facebook towards the end of last year after she introduced herself.

After chatting online for months they met in April and soon decided to marry. Wichit said the woman was not beautiful but spoke very well, was easy to get along with and met with the approval of all his relatives too.

An initial request for 400,000 baht in cash for the dowry and about 80,000 baht in gold was bargained down to 200,000 in cash. But the woman would not budge on the gold meaning Wichit had to sell his car to raise the money to satisfy her demands.

They married at what she claimed was her house though there were only seven relatives from her side of the family.

She was in cahoots with these people, it appears and didn’t even own the house.

When Wichit told his story online others came forward and the extent of the con became apparent.

Pathum Thani police were about to charge her at one point but she managed to flee before she could be arrested.

Now the grooms are trying to track her and her accomplices down and get their money back.

Good luck to them and hopefully this cold-hearted con-woman will be found and brought to justice. At least this time it’s not “stupid farang” who are the innocent victims !