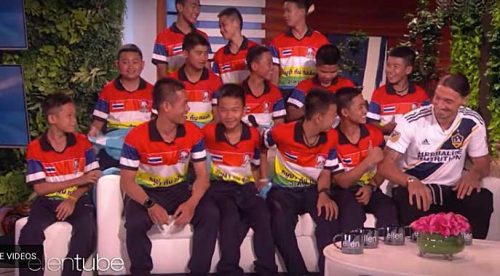 Cave Boys on the Ellen Show

The twelve boys and their football coach who were rescued from a cave in Chiang Rai have made their first studio appearance on the The Ellen DeGeneres Show in the United States.

During the interview the boys, who are part of the ‘Wild Boars’ football academy were surprised by their hero, former Juventus, Inter Milan, Barcelona and Manchester United star Zlatan Ibrahimovic.

Zlatan made his appearance just as the boys named him as their idol.

Zlatan, 37, who currently plays for Major League Soccer team LA Galaxy praised the boys and their coach for their bravery and said they were the “best team in the world”.

The group made headlines around the world in June after becoming trapped deep inside the Tham Luang cave, sparking a huge rescue mission.

The trapped boys were rescued after being found by two British cave divers on July 10th.

The boys said that they meditated and prayed while trapped in the cave.

They told Ellen their goal now is to get a good education and a good job to help support their families. They also said they would like to be professional footballers.

The boys looked visibly taken aback when Zlatan appeared during the interview.

“I thought that that was brave, but this team is braver than me,” Zlatan said.

“They showed their collective team work and had patience… believing in other hands also.

This is probably the best team in the world.”