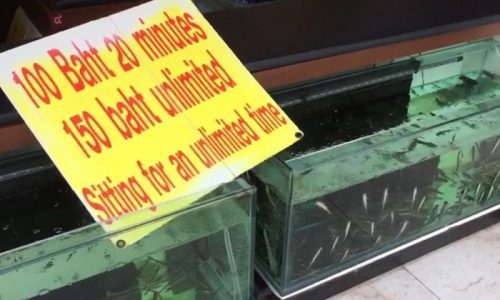 The owner of a nationwide chain of fish spas has hit out at an Australian woman who said she lost five toes from an infection after visiting a facility in Thailand.
She has been blamed for spreading non-specific stories that would have a negative impact on the well-regulated business.
Victoria Curthoys, 29, from Perth was featured in UK’s The Sun after a holiday in Thailand back in 2010. They said she had an “indulgent” holiday that featured a trip to a fish spa.
A previous injury to a toe got infected and she blamed the fish spa for being unsanitary leading to the amputations.
Owner of 100 fish spas Chaiyaporn Lojaya was interviewed by Sanook who said that such establishments in Thailand were vetted by the department of public health – they were safe and regulated.
He cast doubt on the woman’s claims saying she had not said where or exactly when this occurred. It also happened many years ago and why was she only complaining about Thailand now.

He accepted that there were fish spas that might not be up to standard and not licensed by the authorities in Thailand but the woman should not tar all establishments with the same brush.

Doing so was wrong and could mean economic hardship for responsible operators in the business.

(Source:- Sanook)
Times comment:- We have done a little digging and come up with the following report.
Fish pedicures, or fish spas, involve putting one’s feet in a tank full of Garra rufa, a type of small toothless carp that nibbles away at dead skin. For centuries they’ve been used as “doctor fish” in Southeast Asia, and fish spas have become very popular with tourists in recent years. Lately, however, concerns have been raised over hygiene issues and their potential to spread diseases.

Fourteen US states, including California and Texas, have banned fish spas for health reasons. Public health officials are telling people to stay away because some of the bacteria associated with the carp can also affect humans, meaning dangerous skin and soft-tissue infections could arise with the tiniest cut on a foot.

“To date there has been only limited information on the types of bacteria associated with these fish,” microbiologist Dr David Verner-Kefferys, who led a study on this issue, told journalists in 2012.

“Our study identified some of the species of bacteria associated with this fish species, including some that can cause infections in both fish and humans.”

A 2011 bacterial outbreak among 6,000 Garra rufa that were imported from Indonesia to Britain revealed the presence of the Streptococcus agalactia bacteria, which can lead to sepsis, meningitis or pneumonia, reports said.

“The strain we isolated typically only causes disease in fish,” added Dr Verner-Kefferys, of Britain’s Centre for the Environment, Fisheries and Aquaculture Science. “We then went on to look at other consignments of apparently healthy imported G. rufa and found some other species of bacteria that can cause disease in humans.”

These bacteria included Aeromonas and Mycobacteria, which can cause skin infections and gastrointestinal problems. A report from the United Kingdom said most of the bacteria were resistant to multiple drugs.

Thailand’s Public Health Ministry said there were 1,341 registered fish spas and an estimated 3,000 unregistered ones nationwide, according to a Bangkok Post report last year.

So far, there have been few reports of people falling sick after visiting a fish spa – but these reports do indicate a need for concern.