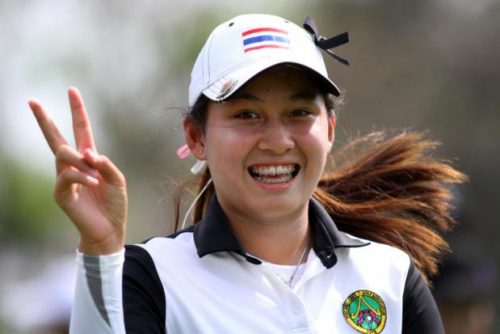 Teenage amateur Atthaya Thitikul became the youngest winner on the Ladies European Tour on Sunday when she beat Ana Menendez of Mexico by two strokes in the inaugural Ladies European Thailand championship at the Phoenix Gold Golf and Country Club on Sunday.

Atthaya produced a level-par 72 on Sunday to finish the week on 5-under-par 283.

She began her fourth round one shot behind Menendez after posting rounds of 70, 71 and 70. But the Mexican player dropped four shots on the front nine, handing Atthaya a two-shot lead at the turn after one birdie and two bogeys on her first nine holes.

At 14 years, four months and 19 days, Atthaya broke the previous record of the formerly top-ranked Lydia Ko, who at 14 years and eight months won her first professional event at the New South Wales Open in 2012.

“I’m so happy for my win this week and feel so proud of myself. I give this win to all Thais,” said Atthaya who took inspiration from former top-ranked player Ariya Jutanugarn.

“I was nervous at the first tee. But I didn’t think about the scores. I just focused on my shots and only on my caddie. I didn’t expect to win this tournament as I just came here to learn techniques from the pro players on the Ladies European,” said Atthaya, adding that she would not turn professional for a few years because she needs more experience.