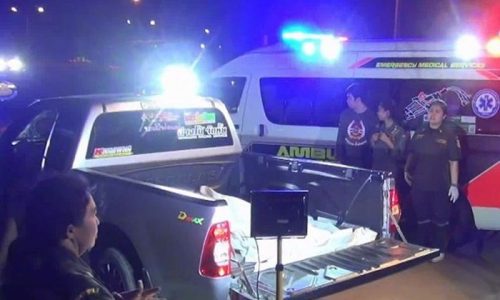 Somboon, 38, was furious that his sleep was being disturbed by loud music coming from a pick-up parked next to his block of flats.

So he went downstairs from his third floor room to ask the people to turn it down so he could sleep.

This made Somboon even more angry. So he went back upstairs and got his .22 gun then proceeded to shoot twenty year old Chaiwat in the head.

Bang Sao Thong, Bang Plee police in Samut Prakarn found the victim dead at the back of his Isuzu pick-up. He had been shot once in the left temple.

The shooter Somboon was waiting upstairs in the Kheha Muang Mai flats to be arrested. He had with him the .22 gun.

He has been charged with murder and weapons offences.