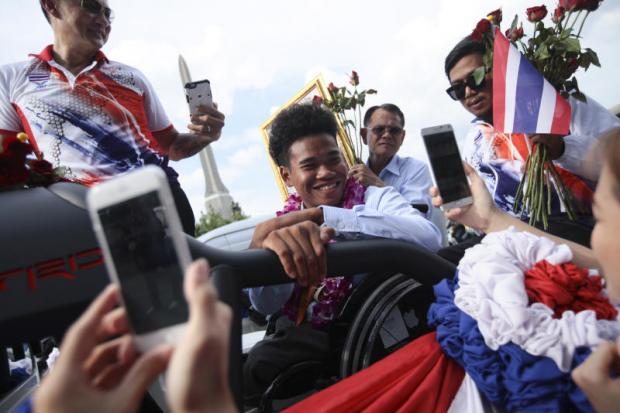 Paralympians pose for selfies with well-wishers. (courtesy of Bangkok Post)

A huge payday arrived on Tuesday for the Thai Paralympic Team when they received bonuses from the government for their unprecedented success at the Rio Games.

45 athletes in 10 sports at last month’s tournament produced the country’s best ever Paralympic results with six gold, six silver and six bronze medals. They finished 23rd out of 159  in the medal table.

Yesterday they participated in a victory parade from Hua Mark to Government House where the Prime Minister presided over a reception.

They were thanked by the Prime Minister on behalf of the Thai people who he said were all very proud of them and grateful for their monumental efforts in achieving such outstanding results.

He encouraged the athletes to work harder for the next Paralympics in Tokyo in 2020, stating that winning a title is tough but defending it is even tougher. He added that continued improvement will be required to take the level even higher.

The prime minister also handed bonuses to them. Under the National Sports Development Fund’s bonus scheme for the Paralympics, a gold medal was worth 7.2 million baht, a silver 4.8 million baht and a bronze 3 million baht.

Aside from this, coaches and associations of the medallists also got bonuses. In addition, the 26 athletes who failed to win medals each received 100,000 baht as a gift. In all, the government paid 182.9 million baht to the team.

Many will see this as a large amount of money to hand out but it has to be taken into perspective. These athletes have provided inspiration and hope to thousands of disabled sportspeople and have probably been responsible for thousands more  taking up a sport.

This can only be good as it gives people with a disability a purpose in life where often they would feel there was none. Also, disabled sportspeople find it more difficult than their fully-fit counterparts to get sponsorship so they have to be even more courageous and determined. 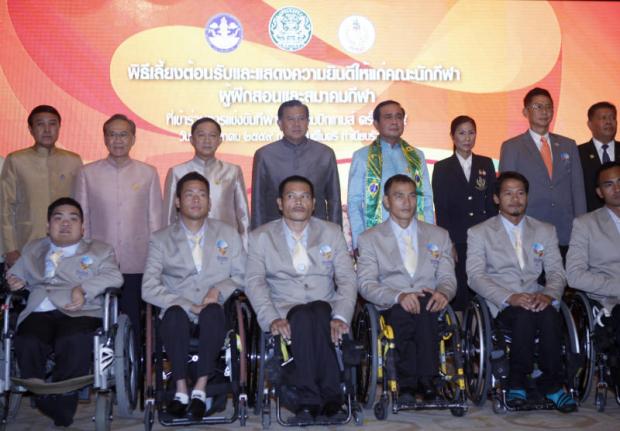 We at the Buriram Times applaud them.