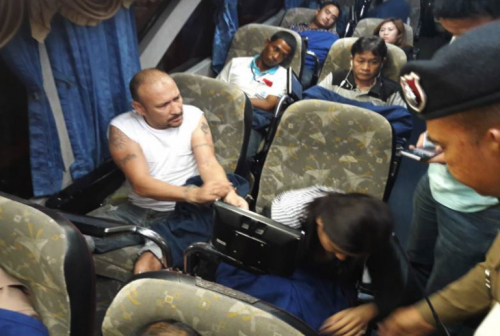 A foreign man suspected of a number of burglaries at high profile properties in Pattaya and Bangkok, including one at the home of Thailand’s Deputy Minister Prawit Wongsuwan, has been arrested.

Robert Alexander Williams, 45, who holds a Colombian passport but whose birthplace is believed to be the United States, was arrested on Saturday morning in Khon Kaen.

Police received information that Williams and his girlfriend were travelling the Bangkok-Udon Thani bus and setup up a roadblock in Ban Phai district.

The pair were then arrested and taken to Ban Phai police station for questioning.

Thai media reported that Williams has had a warrant out for his arrest since 26 April 2016 for being part of a gang of Colombians who burgled properties in Bangkok, Pattaya and Chonburi during Songkran 2016.

Pol Lt Gen Thanasak Ritthidejpaibu investigating said that Williams had confessed to burgling the homes with four other Colombian men. Williams told police that one of the homes belonged to a senior military officer where cash and valuables totalling more than 2 million baht were stolen.

Police said they are still searching for the other members of the gang, while Williams and his Thai girlfriend will be transferred to Don Mueang police station in Bangkok.