In a statement made by the director-general of the Department of Corrections, it emerged that Min Buri and Klong Prem prisons in Bangkok and Pattaya Prison in Chon Buri have set up segregated zones for lesbian, gay, bi-sexual and transgender (LGBT) inmates .

The move makes Thailand among the first countries to provide such accommodation for LGBT inmates.

Reporting on the progress of the department’s plan to separately house LGBT inmates as proposed by various agencies and human right groups, the director said prisons did not currently incarcerate many LGBT inmates making it difficult to justify separate facilities for them. He added that transferring LGBT prisoners from various jails to a single facility could also mentally affect them and pose difficulties for family visits.

However, the department must consider the matter based on reality, current problematic conditions, the safety of LBGT inmates and the necessity of preventing sexual harassment, he said.

One possible solution was for those prisons with a large number of LGBT inmates to set up special zones, he said, adding that the Min Buri, Klong Prem and Pattaya jails had already done so.

Self-identified LGBT prisoners account for slightly more than 1 per cent of the total population of 300,000 inmates in Thai prisons.

In the past, the department would divide the LGBT inmates according to four groups. Men who had undergone a sex-change operation and were confirmed by physical examination as transgender people would be sent to the women’s jail. Transsexual men with feminine behaviour would initially be sent to the men’s area pending a final court ruling on their criminal cases before they would be sent to spend time in other areas. Homosexual females would be kept in separate sleeping cells. 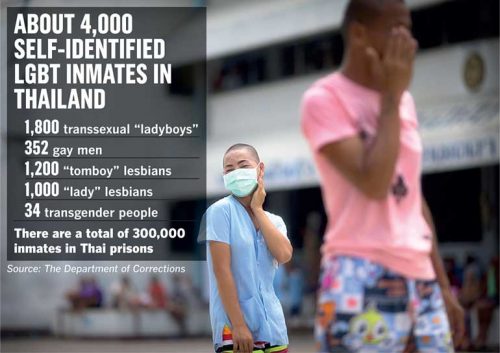 Records show that Thailand does not currently incarcerate hermaphrodite inmates but department guidelines state they would be initially treated according to the gender specified on their household registration documents. When allowed by a medical diagnosis or a court order, the person could choose which sex to be treated as while serving their term.