Thai Road Rage: Women Gets On A Bus And Attack Driver After He Side Swipes Their Car 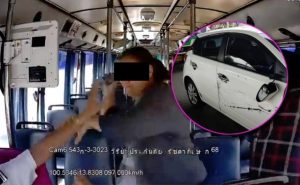 Thai Road Rage: Women get on a bus and attack driver after he sideswipes their car

CCTV footage onboard a Bangkok bus showed two women attack a bus driver with their fists.

Moments earlier the 543ก (gor) bus had sideswiped their Toyota Yaris near Soi 70 on Ratchadaphisek Road.

The assailants were met with a storm of criticism from netizens.

But one of the women hit back saying there was a six year old in the car and she got really mad after trying to board the bus and getting her hand trapped in the door.