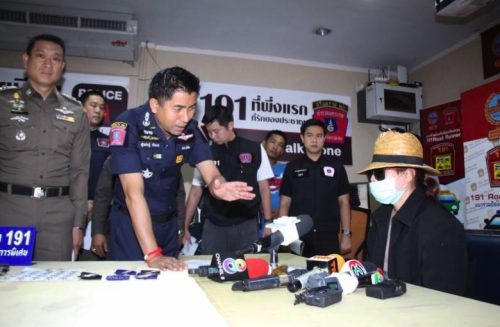 A Thai woman studying at university ripped off her friends and others to the tune of 160 million baht – then started crying at police HQ saying it all got out of hand.

Nitchaphat Phatrathada, 32, appeared at 191 Special Branch HQ in Bangkok on Saturday after being arrested in the north east on two southern Thailand warrants for fraud.

She had fled earlier in the year after an investment scheme went belly-up.

The woman had started a Facebook group first under the name of “Klum Rap Sap” (Get rich group) then calling herself “Mai Ka” changed the name to “House Number 5”.

She had hundreds of members and at first offered, and paid out, 3% interest over seven days saying she was investing money on behalf of her clients.

Many of the victims were her friends and were delighted with initial gains.

At first they were limited to 50,000 baht investments. Then they were encouraged to invest more with the promise of gold as well as high interest if they did.

By June of this year it had spiraled out of control and she disappeared. Some people had invested a million baht.

She bought condos, houses and vehicles with the money – and gambled on the lottery, said Daily News.

On Saturday in disguise she turned on the tears. But 20 of her victims were not buying that – they objected to bail for her.

Hundreds of victims have lost around 160 million baht.

The woman was studying a masters degree in administration at a university that was not named.

How does the saying go? “A fool and his money are soon parted !”