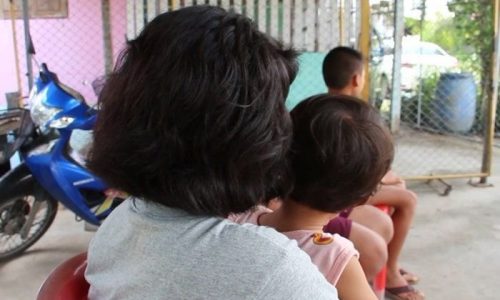 A Thai mother in Ang Thong has gone to the media for justice after she claimed that her 11 year old grade five daughter had been assaulted 28 times in front of 100 other students.

She had done nothing. But her three year sibling had failed to throw a chicken essence bottle in the trash so it was decided to punish the elder sister.

The school in Pa Moke district announced to students that the public punishment would take place. It was decided to administer 35 strokes – one for each baht that the little bottle of essence cost.

The student “Koy” didn’t tell her mum about the beating but she found out from a friend’s parent who said that 28 strokes were in fact given.

She said it was administered by a teacher of grades P1-P3.

Furious Angkhana, 29, went to the local education authority after the attack on August 30th.

The school director and the teacher concerned were called in. The teacher was transferred to inactive duties but was back teaching at the school as if nothing had happened after two days.

None of the children who witnessed the beating wanted to go in to school after that but Angkhana was worried that her daughter would suffer as a result so she sent her in.

Sanook went to the school and spoke to the teacher who denied the severity of their actions saying no teacher wants to hit students.

The teacher said they had apologized for it but no one wanted to listen.

Asked if the beating happened in public in front of 100 students the teacher clammed up completely.

Times comment:- As a former teacher of young children, my views on this are widely known. It is beyond belief that these assaults are still going on. If the school and the teacher have apologised then obviously something untoward has gone on. Of course children need discipline but we are not living in the dark ages and beatings are not acceptable no matter what the “perceived offence”. The fact that the poor child had done nothing makes it even worse. Heads should roll and the teacher concerned should never be allowed near children again.