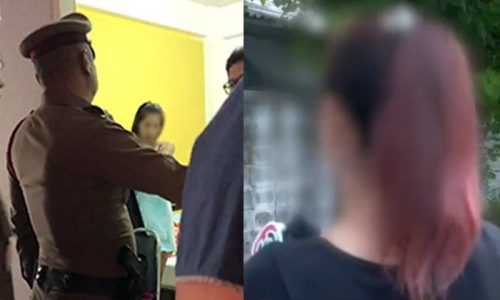 A Thai university student – identified only as Neung – has told the media how she took part in a sting operation at a short time hotel to expose a professor.

The professor at a leading university was only giving good grades to attractive women if they slept with him.

The student and her friends had noticed that attractive women were failing – it didn’t seem to matter how talented they were.

That was until they went to see the professor to discuss how they might become “A” students.

This led Neung, 26, to the hotel room while a female professor in on the sting and police officers waited nearby.

Neung was asked to undress but she asked the professor to do it for her. She stalled and stalled as only one button was undone and she wore a towel. She then started asking about condoms.

He produced a packet and opened it then while he was distracted in the toilet she secretly unlocked the door to enable the police to have easy access in the moments to follow.

When the professor came out of the toilet he ordered her onto the bed and prepared to have sex with her.

She called out and the female professor and soon after police were suddenly in the room.

The sting came after allegations against the man had been made and he was suspended from his job and a committee set up to investigate.

But hard evidence was needed of what he was doing.

The age of the person in the sting, however, is not indicative of all the professor’s behaviour.

He has been charged with sleeping with women over the age of 15 and not yet able to give legal consent.

Times comment:- One less piece of trash in the system !