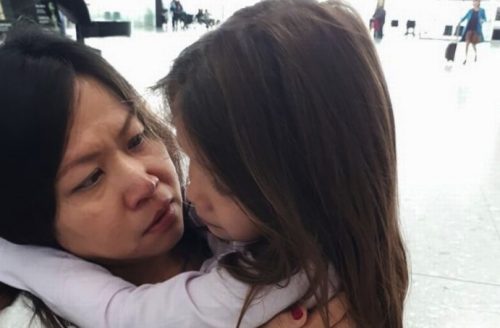 A six year-old Sevenoaks girl is facing winter without her mum because visa rules mean she was forced to return to Thailand alone.

The little girl and her dad, Andrew I’anson say they have been left heartbroken by the regulations which have split the family.

The rules, introduced in 2012 and upheld by the Supreme Court this February, mean foreign spouses can only remain in Britain if their partners are earning more £18,600 a year.

Mr I’anson, who returned from Thailand in May with his wife, Wanna, and daughter Kayla said the family had been torn apart by “unfair and absurd rules.”

“I have paid tax and put money into the country and I get treated like a third class citizen in my own country. My daughter is British. Does she not have a right to be with her mother?”

The 54 year-old dad said the family moved back to their home in Cramptons Road to give Kaylaa British education.

But he said his wife, 44, was only given a six month visitor’s visa which ran out last week, forcing her back to Bangkok.

The couple, who had been living in Thailand for the last eight years, also failed to qualify for a spouse’s visa because they do not have savings of more than £62,500.

“I understand why these rules may have been introduced but my marriage is not a sham. We have been married for 10 years and have a child together who has a British passport. It just seems very unfair,” he said.

Mr I’anson said since his wife’s departure he had also been forced to give up his £15,000 job as a warehouseman because the hours did not fit in with school pick-ups and drop-offs, something she would normally have done.

He said he had also written to Sevenoaks MP, Sir Michael Fallon asking him to fight the “cruel way British citizens are treated.”

“Maybe instead of making life a living hell for my family, why not give us a chance? I had a job, my wife could have her old job back and we could be a happy family. But this is not the case. We are split up and life is a living hell,” he said.

Whilst it’s good that there are rules in place regarding immigration, it does seem harsh that someone who was working and obviously in a committed relationship has to see his family torn apart.

When you think about the thousands of “freeloaders” that are allowed into the UK it does seem grossly unfair that these situations are not judged on individual situations rather than just a strict blanket ruling.