Thai Woman Wanted Dandelion Seeds Tattoo But Got “Crucifixes” Instead 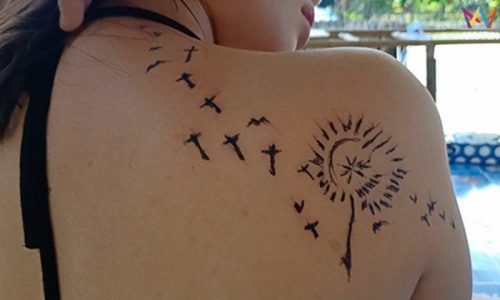 A Thai woman went on Facebook – then to the police – after a drunk tattooist left her with much more than she bargained for.

Isara or “Nong Kwang” had just gone home to Sakon Nakorn in Thailand’s north east and decided to get a tattoo done on her back.

It was the last day of a promotion and she went with her younger sister to a parlour in the town.

She took with her a picture of a dandelion with its seeds floating away gently on the breeze. A fee of 300 baht was agreed to replicate the design on her back.

Kwang said that throughout the work the tattooist was not only drinking beer and smoking cigarettes but was stroking her back repeatedly.

When this had gone on for the best part of an hour she was worried that the tattooist was doing too much and she demanded a mirror and that her younger sister look closely.

She was horrified and confronted the tattooist who said: “It’s called art – it’s very similar to what you wanted”.

She declined his offer of repairs and went to Facebook where many posters said they had been to the same parlour with equally terrible results.

Then she went to Phang Khone police.