Thailand won a record fifth Suzuki Cup with an impressive 2-0 victory over underdogs Indonesia. Siroch was the hero with goals either side of half-time to put the War Elephants in control.

The victory would have been even more emphatic had top-scorer Teerasil not fired a woeful second-half penalty straight at the keeper. However, it didn’t really matter as Thailand controlled the game for the whole ninety minutes.

They had the ball in the net in the second minute but it was correctly ruled out for offside. Further chances were spurned before Thailand finally broke the deadlock in the thirty-seventh minute,albeit rather fortuitously. Chanathip found Theerathon who sent over a low cross which was cleared by a defender onto Siroch eight yards out and the ball cannoned off him and into the net. 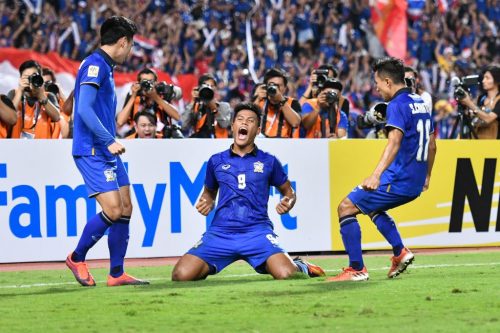 Thailand went ahead in the final two minutes into the second-half with a superb goal. Theerathon picked out Chanathip and the playmaker cleverly threaded the ball through to Siroch who looked up and curled a delightful fourteen-yard shot into the net.

The game should have been put out of Indonesia’s reach when Thailand were awarded a penalty following a foul but Teerasil put the ball in the centre of the goal and the keeper blocked the shot with his flailing legs.

However,Thailand remained in total control of the game and Indonesia rarely looked like repeating their heroics of the first-leg.

Head coach Kiatisuk has been involved in all Thailand’s record five Suzuki Cup victories, three as a player and two as coach.