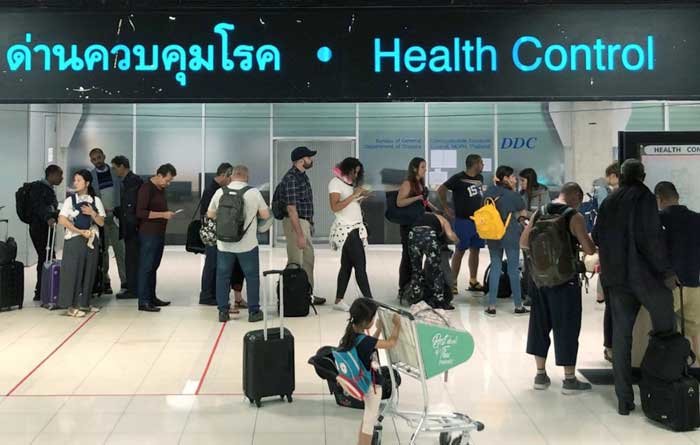 Tourist line-up in a health control at the arrival section at Suvarnabhumi international airport in Bangkok, Thailand, Januaruy 19, 2020. REUTERS/Jorge Silva

Thailand has quarantined a fourth patient with the new coronavirus including one Thai national, authorities said on Wednesday, days before the Lunar New Year holiday when thousands of Chinese tourists are expected to arrive.

Nine people have died from the flu-like coronavirus in China, with 440 confirmed cases, most in the central city of Wuhan where the virus first appeared late last year.

The Thai patient, a 73-year-old woman, had traveled to Wuhan during the New Year holidays and developed a fever after returning, the Public Health Ministry said.

She was being monitored in a separate ward in a hospital in Nakhon Pathom, 60 km (37 miles) west of Bangkok, where her condition was gradually improving, it added.

“We can control the situation. There have not been cases of human-to-human transmission in Thailand because we detected the patients as soon as they arrived,” Public Health Minister Anutin Charnvirakul told reporters.

Two other Chinese patients had recovered and been sent home while a third would return once tests showed he was clear of the virus, Anutin said.

Thai officials were stepping up screening at airports to look for passengers with high body temperatures, coughs, headaches and trouble breathing, police said.

The virus has spread to other cities including Beijing and Shanghai, as well as the United States, South Korea, Japan and Taiwan.