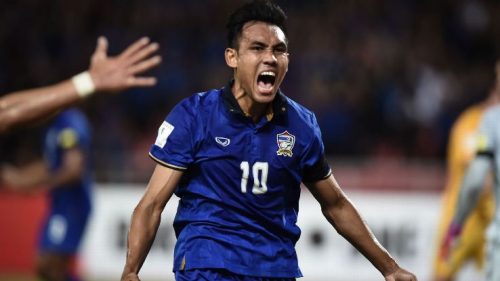 Following their heroics against Australia, Thailand went into their match against Indonesia full of confidence. The game was played in heavy rain, with Thailand being a long way from their best.

They ran out 4-2 winners with Teerasil being the hat-trick hero.

Thailand made a dream start when following a dreadful defensive blunder, Peerapat sent a low,measured lef-foot shot into the far corner after four minutes.

It got even better for them in the 36th minute when Teerasil reacted to a deflection in front of goal and just managed to get enough on the ball to force it over the line.

It was a scrappy game, with both teams guilty of giving the ball away far too often. The second-half started badly for Thailand with Indonesia rocking them with two goals in three minutes.

First Boaz Solassa was allowed to head a left-wing cross past the stranded keeper in the fifty-third minute. Three minutes later, Lerby Babu got between two static Thai defenders to head in a right-wing cross, again leaving the keeper a mere spectator.

Thailand pushed forward but never really threatened the Indonesia goal. However, a move of real quality allowed them to regain the lead in the seventy-ninth minute.

The ball was worked down the left before a low cross was laid back into the path of Teerasil who drilled a low shot just inside the post. A superb piece of finishing.

Thailand comfortably saw out the remaining minutes before Teerasil had the simplest of chances to complete his hat-trick from close range in the third minute of stoppage time.

Not a performance to remember and the defence were badly at fault for both goals.
A big improvement will be needed in the next game if the War Elephants are to retain the Suzuki Cup.

Times are Thai time and both games will be shown live on Sports Channel 7.