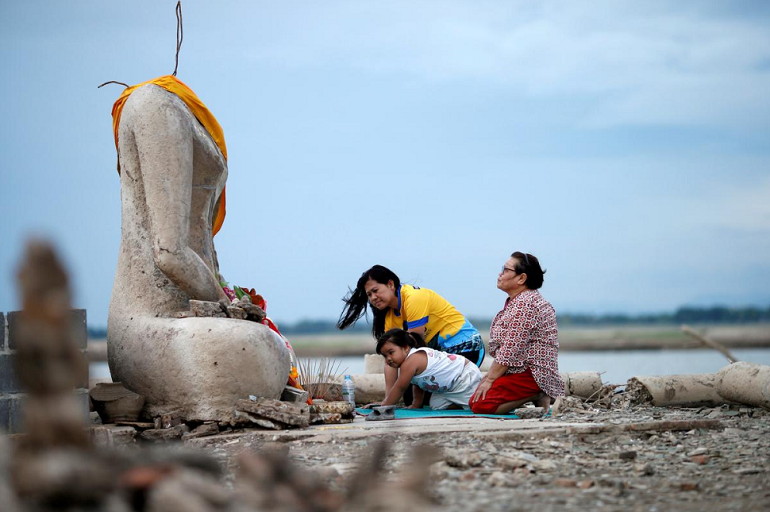 FILE PHOTO: A family prays near the ruins of a headless Buddha statue, which has resurfaced in a dried-up dam due to drought, in Lopburi, Thailand August 1, 2019. REUTERS/Soe Zeya Tun

Thai Prime Minister Prayuth Chan-ocha on Tuesday urged people to turn off taps and shower less to cope with a drought afflicting northern and central Thailand.

Last week, Bangkok’s water authority said the capital’s tap water was becoming saline as seawater pushed up the depleted Chao Phraya river, a source of much of central Thailand’s water.

The cabinet agreed on Tuesday to spend 3 billion baht ($100 million) on boreholes and pipes to extract ground water to relieve a drought that is expected to worsen in the next few months, a government spokeswoman told reporters.

Thailand’s dry season started in November and usually lasts through April, although this year authorities say it could go on through June. A drought has been declared in 14 provinces in the central, northern and northeastern farming regions.

“Please all help save water. Turn off all the taps. Use less water,” Prayuth said. “Reduce tooth-brushing and shower time by one minute.”

With reservoir levels low, the government has also asked farmers in some provinces near the Chao Phraya River basin not to grow off-season rice.