“Thank you for coming” – why MotoGP found itself smiling in Thailand 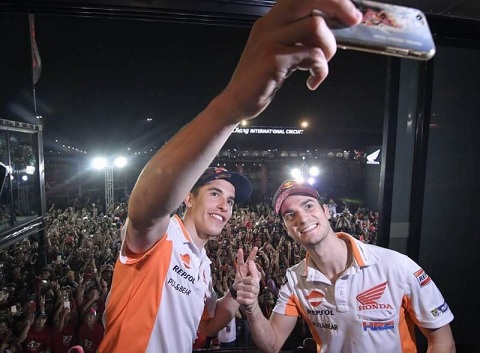 While the rest of Thailand’s media left Chang International Circuit on Sunday evening to join a thank you dinner arranged by the circuit’s PR team, I stayed to complete and post my final report from the MotoGP Winter Test.

I was reflecting on the overall nature of MotoGP’s first trip to Thailand as I walked to the motorcycle parking lot when I was handed the perfect summary in one brief encounter.

A small party of Thai fans, mostly young women, was waiting at the paddock gate for the teams and riders to come through on the way to their hired vans. As I got closer I saw Alex Rins and some of the Suzuki crew come out.

The rider hesitated as he saw the group and there was an awkward moment of silence until I heard a girl say, “Thank you for coming.” Alex, who had covered 875 kilometres over three days, smiled and that was enough for a few minutes of autographing as the mechanics looked on patiently.

It was a moment in which the polite charm of local fans was met with a matching, warm response from the Spanish star and one that I suspect would not have happened anywhere else.

It was also in sharp contrast to the hostile glares and surly silence this Brit got in response to the cheery welcome I extended to a group of Marc VDS personnel who were hanging around at the rear of their garage on Thursday evening.

I had seen plenty of evidence, even before the test began, that this coming together of the pinnacle of motorcycle racing with the people of Thailand would be more successful than many within MotoGP’s gritty elite had been expecting. Thailand’s Ministry of Tourism and Sport, which is funding the event’s licence fee, together with oil giant and title sponsor for the race, PTT and the Buriram circuit owner, put in impressive efforts to ensure everything went smoothly from the moment the visitors touched down In Bangkok.

At Yamaha’s media junket on Thursday, team boss, Lin Jarvis praised the organisers for the smooth logistics and facilities at the track which, he emphasised, have to be right in all aspects for the team to perform successfully.

As the bikes broke the silence at Chang International Circuit for the first time on Friday morning it became clear that the circuit, which some riders had previously described as “boring” or “funny”, was a good deal more suitable and more fun than they expected. At MotoGP speeds they were better able to understand what circuit designer, Hermann Tilke, had in mind when he first got his crayons out in 2014.

After some initial gripes about dust left on the track from the previous weekend’s Buriram Marathon, everyone got down to the business of familiarising themselves with the track layout and surface and of getting machines set up for the season. 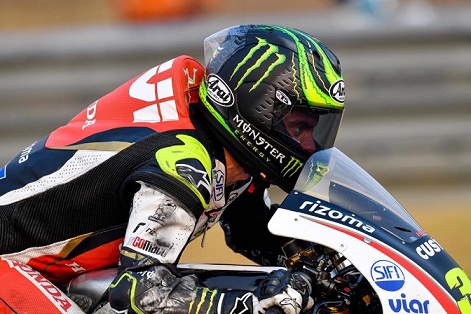 The weather was better than they expected too. For teams that analyse everything, they came up surprisingly short on the weather, which was assumed to be similarly hot and humid like Sepang. In fact this is winter in Thailand, which means cool mornings before temperatures rise towards midday.

The 09:30 starts on the first two days, and even the 09:00 start on Sunday, wasted some good testing time. Even in the afternoon, with air temperatures in the late thirties and track temperatures in the mid forties, the humidity was a lot less sapping than it had been in Malaysia two weeks previously. That meant that a lot more laps were possible and some teams were forced to reduce track time on the final day as they ran low on fuel. 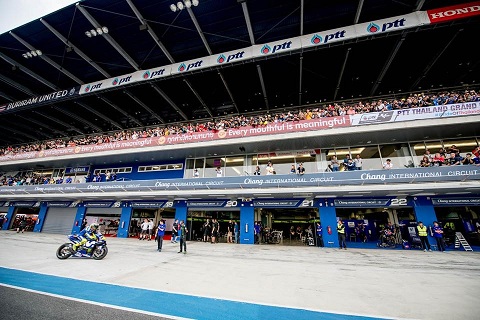 The test reached its peak on day two, with riders putting in high numbers of laps (Mika Kallio did 99 for KTM) in front of a grandstand that appeared to have more people than available seats. The PTT Thailand Grand Prix Expo area was also bustling through to the evening with browsers and shoppers.

What characterised the biggest crowd I have seen at the track, was how quiet they were, quite unlike anything you would see in Malaysia or at European circuits. Most of them were new to the sport and had been drawn there by curiosity and the intense media coverage in the build-up to the test, so they sat, watched and listened politely to what was going on below them and enjoyed the stadium layout, which enables them to see most of the track from the main stand. 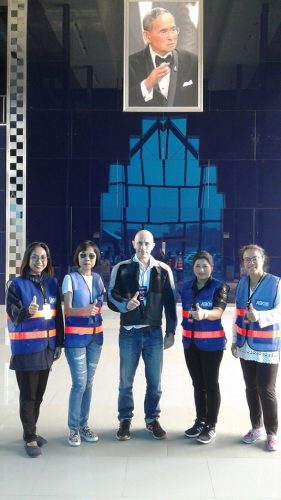 There was plenty of help for foreign visitors. In a large tented area near the ‘Glass Tower’, which leads through to the VIP lounges, Buriram’s Tourist Police lined up with staff from the Ministry of Tourism and Sport and members of the ‘ASK ME’ team.

ASK ME is a group of around 20 multi-lingual volunteers deployed around the circuit to help visitors get to where they want to go and to give information about the venue, the event and the locality. I spoke with many of them, who were taking time out from their regular jobs in schools, hospitals, police stations and other walks of life, and they were all dedicated to making sure people have fun, stay safe and make the most of their time in Buriram.

The town centre was also buzzing with activity. Kiattiyot Promhong, owner of Lifestyle Restaurant said, “This weekend has been good for Buriram. My restaurant was full on Friday Saturday and Sunday. So many Thai fans were here from Bangkok and some of the Dorna and foreign media people came in too. My friends who own other restaurants in the town also said they were really busy.”

Olivier Branens, owner of Oli Wine Bar & Restaurant and Bus by Oli Buriram, added, “We were very busy during the test weekend. As well as many spectators, we had people come to eat from Yamaha and Ducati. We have been looking forward to MotoGP. It is very good for Buriram and good for business.”

Buriram Times reporter, Colin Bradwell, observed, “The sheer numbers of people coming to the test says it all. It’s fair to say that the people of Buriram and the owners of the bars and restaurants here were overjoyed with MotoGP. Can’t wait for the real thing in October.”

Race weekend will be very different, with large numbers of foreign visitors expected, but for MotoGP’s introduction to Thailand, this Winter Test could hardly have been better.

Article by Barry Russell and reproduced by kind permission of Wroommm!!