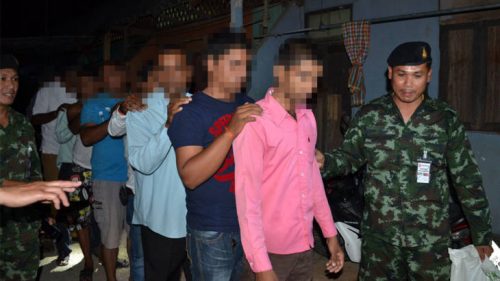 Police and military raided a building in downtown Nakorn Pathom following complaints of loan-sharking by Indians.

As the raiding party arrived at the address on the Prapa – Na Sang Road the startled Indians scattered in all directions.

But nine were soon rounded up and taken into the police station. Many accounts books were found in their rooms along with cash in plastic bags.

Police learnt that they had been selling cloth, running a hire purchase scheme and loan- sharking. Locals had complained they were being asked to fork out interest of 10% per day which is against the law.

Police further discovered that  the Indians had no right of abode and many had passports that had long since expired.

They said that what had started as a small business for many of them selling nuts had developed over the years into a thriving community preying illegally on the Nakorn Pathom locals.

Loan-sharking is an abhorent crime as it preys on the vulnerable, this was a job well done by the authorities.