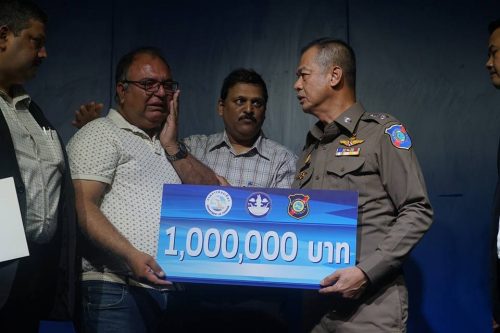 A press conference has been held to present cheques worth two million baht to the family of the victim of the shooting in Pratunam.

Dheeraj died after being hit by a stray bullet.

One cheque came from the Ministry of Tourism and Sports and the other was from insurers Chubb.

The cheques were huge in the sense that they took up a lot of space in the press photos.

Four people were wounded in the shooting behind the Pratunam shopping center. They have also received compensation and are recovering in Ratchathewi Hospital.

The Tourist Police Bureau site on Facebook said that the hunt for those responsible goes on.

One man has already turned himself in to cops.

The TPB under the leadership of acting commissioner Maj-Gen Terapon Kuptanond and the metropolitan police are investigating.

Earlier it was reported that “war weapons” may have been used by three men who attacked a group of 20 others who came out of a snooker hall.