Tourists Met With Cool Weather As Well As Popular Attractions 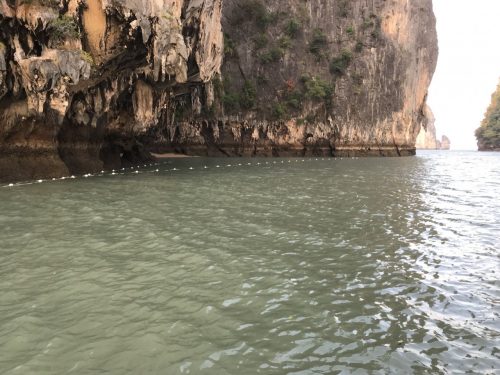 Many provinces have prepared for an influx of tourists during the long holiday season and many tourists have already experienced some cool weather in their travels.

Officials at Ao Phang Nga National Park, a top destination in the southern part of Thailand have prepared several facilities for tourists. They have installed pontoons in the sea to mark where boats can and cannot moor. Park officials said they have also set aside areas where people can swim and tie up canoes. These measures are also designed ensure the safety of tourists.

Officials on Friday placed 200 metres of pontoons for mooring longtail boats and canoes.

Police in the northeastern province launched a campaign on Friday night to clear up drug abuse at six large entertainment venues in the downtown area.

They also gave urine tests to some tourists but had not yet found any drug addicts. Khon Kaen Governor Somsak Changtrakool, who led the campaign, said the authorities want to ensure that nobody under 20 visited pubs. They also aim to prevent human trafficking.

A lot of tourists have flocked to Nong Khai province, which shares a border with Laos, to see the spectacular sea of fog over the Mekong River. About 300 tourists visited Phu Huay Isan yesterday morning to see the fog and experience cool temperatures of 17 degrees Celsius. They also witnessed a beautiful sunrise. Tourists can also see fog at Phu Lone, Phu Nong and Phu Phaduk.

Cold weather has meant that lotus flowers have not blossomed at Lotus Memorial Park at Nong Han Lake in Sakon Nakhon. This is the largest lotus park in Thailand, with about 100 different strains of the plant. Temperatures have plunged to about 7 degrees Celsius over the past few days. Wilaisak Kingkham, vice president of Kasetsart University Chalermphrakiat Sakonnakhon Campus, said there are only a few lotus blossoms in the afternoon when there is sunlight.

It is expected to take two or three days before the lotus flowers blossom – if the weather warms up a bit. The best season to see lotus blossoming is from mid-January to March, according to Wilaisak.

Cold weather has slowed the growth of mushrooms in the northern province, affecting the income of farmers in the district of Pho Prathap Chang. The temperature dropped to 11 degrees then went up to 14 yesterday, but mushrooms grow better in humid and warm weather. However, mushrooms stay fresh and can be kept longer in cool weather.

Tourists flocked to Phu Lae Lao at Ban Khok district of this northern province, which shares a border with Laos. The morning temperature was as low as 4 degrees and some tourists took in the fresh air and made sightseeing trips to the pine forest.

Over the past few days, the mercury plunged to minus 1 degrees, causing frost in some hillside areas. In the downtown, the temperature rose to 8 or 9 degrees on Saturday morning. Not many tourists are currently visiting Mae Hong Son but large numbers of them are expected after Christmas. Among the tourists, about 60 per cent are Thais. About 700,000 tourists visited the province last year and the numbers are not expected to change much this year. However, officials see potential as there are many scenic places that few people know about.