Trapped Boys COULD Be Rescued This Week According To Governor 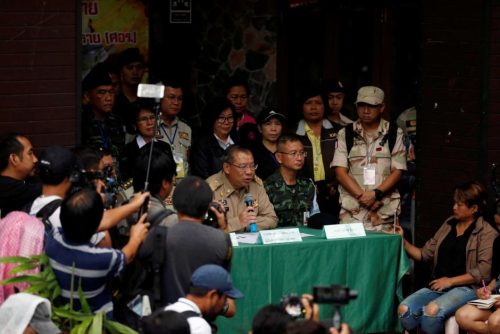 The twelve young footballers and their coach who remain trapped in the Tham Luang cave in Chiang Rai could be evacuated this week, according to Chiang Rai governor Narongsak Osottanakorn.

Governor Narongsak gave a press conference on Wednesday morning to say that if the weather remains good, condition are perfect to attempt to evacuate the group this week, with rescuers continuing to make preparations for an evacuation.

However, the governor denied reports in Thai media that the boys will be evacuated today.

Meanwhile, an army spokesperson has said that no exact date has been sent for the evacuation of the boys and any rescue attempt is dependent on the water levels inside the cave.

While the boys are currently safe on high ground, if the flood water was to rise further, an evacuation would be almost impossible and providing supplies to the group be would much more difficult.

Currently water is being pumped out of the cave at a faster rate than it is coming in, the spokesperson said, but water levels have not reduced enough to carry out an evacuation.

Contrary to reports, the high water levels also meant that rescue workers have been unable to install a telephone line inside the cave so the boys have not yet spoken to their families.

Initially rescue workers said they planned to install a telephone line in the cave on Tuesday evening but that has not been possible.

On Wednesday morning, Thai Navy SEAL released video footage of the boys inside the cave.The boys were seen wrapped in space blankets to help them keep warm. Others were seen receiving treatment for small wounds to their feet and legs.

All the boys appeared to be in good spirits as they gave a wai and said “sawadee khap” to the camera.

Navy SEAL divers and specialist medics have confirmed they will remain with the group until they are evacuated.

On Tuesday medics said the boys had been given clean water to drink and special high calorie gels to give them energy and vital minerals and nutrients.

Also on Tuesday, Thailand deputy prime minister Prawit Wongsuwan played down reports that it could take up to four months to evacuate the boys.

However, on Wednesday a military spokesperson said that keeping the boys in the cave until October, which is when the monsoon waters will likely have receded, is still an option being considered by rescue workers.

Other options that would allow the boys to be evacuated was to teach them how to scuba dive, while drilling an escape route from another area of the cave has also been discussed.

In an interview with Sky News, diving expert Ben Reymenants who is at Tham Luang and involved in the rescue mission gave an insight into the conditions inside the cave.

“This is one of the more extreme cave dives that I have done. It is very far, and very complex. When it starts raining the flow is so hard you can barely swim against it and the visibility reduces to zero,” he said.