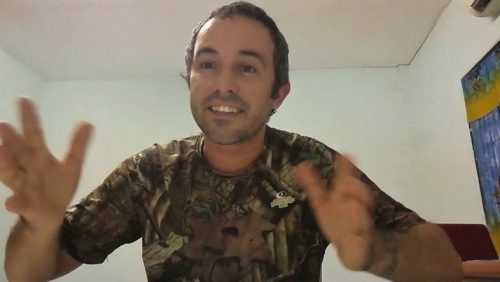 US native Udom Suksanaih – famed for his funny videos in the Thai northern dialect online – has gone to the US consulate in Chiang Mai to start the process of renouncing his US citizenship.

The Phrae resident said he is going to “do just fine” without US citizenship and is only loyal to Thailand.

It is the first step in his becoming Thai – a lifelong wish since he came here with missionary parents from Wisconsin.

Udom said that he has considered himself as a Thai his entire life and hopefully that soon will be a reality.

He works for a company called Farang Muang Phrae Lt.Part exporting hammocks. He says he has had a work permit and paid taxes for years and years but often goes online to say that the jewel in the crown is missing – Thai nationality!

So yesterday he went to the US consulate to begin that process so he can be considered as much a Thai as his wife Kanita, 44, and daughter Venus, 4.

He said: “What the Thai authorities are requesting is that I show evidence that I have stated my intent to formally renounce my American citizenship after I have received my Thai citizenship. I have to show that as part of my application.

He was keen to stress that he has not given up anything yet. His consulate visit was just a required first step to discuss the consequences.

He continued: “I have identified as a Thai person my entire life. For me being a Thai citizen would mean that finally I can fully identify with the country I am loyal to, Thailand!

“The consulate told me yesterday what I would be giving up. It sounds like I’m going to do just fine without American citizenship when the day comes.

“I mean no disrespect to the American people but for me and who I am Thailand is the only citizenship I will ever need. My understanding is that dual nationality is possible but I have always and consistently said that I will only hold one citizenship because I am loyal to only one country, Thailand”.

Udom has featured in many fun videos on Facebook over the last few years making thousands, of what he hopes to be his new compatriots, laugh out loud.