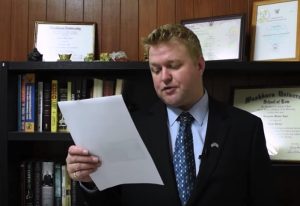 A leading firm of US attorneys in Bangkok has reacted to the news of the surprising transfer of head of Thai Immigration Lt-Gen Surachate “Big Joke” Hakparn.

A lawyer has poured cold water on suggestions that the chief’s transfer would mean a better deal for foreigners and retirees seeking visas and extensions.

In a three minute YouTube video the managing director of Integrity Legal based in Silom Road, Bangkok, said that changes to income affidavits would not be rescinded just because the chief has been transferred.

Benjamin W. Hart called this “immutable” and fully expected current changes from the US, UK and Australian embassies to stay in place. He stressed that according to him there was “no possibility of this changing” just because of “the transfer of this officer”.

Mr Hart called Lt-Gen Surachate the “face of immigration policy enforcement” but also saw no reason for changes to the rules that state 800,000 baht must be deposited in a bank for two months prior and three months after a visa is issued.

“I don’t think it is logical to assume that the transfer will change these regulations,” he said.

Though he conceded that these opinions did not preclude possible changes in policy.

“We don’t know exactly what’s going on and how this will impact things. (But) while I think there may be changes within the immigration apparatus especially on a paradigm level and maybe policy level (in the future) some things in respect to retirement visa police remain immutable (unchanging)”.

Those are the affidavit situation and financial requirements.

The comments came as many posters on Thaivisa forum and other online platforms reacted over the weekend to the chief’s sudden transfer to an inactive post. Many expected, and hoped, that the change at the top would mean a better situation for retirees and visa extensions in general.

Rumours have been flying about as to the reason but as yet there has been no official confirmation.

Surachate has been described as the poster boy of the Thai police and his image and presence was everywhere. Now his online presence has been taken down amid intense speculation about his future.